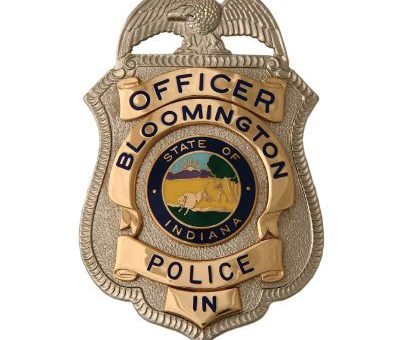 An officer from the Bloomington Police Department was in the 2400 block of S. Henderson around 12:47 p.m. Wednesday when he observed a gray Ford Taurus bearing a license plate indicating its owner might be wanted on an arrest warrant.

The driver of the vehicle parked and exited while pulling up a hooded sweatshirt on a sunny day. The man was also wearing long pants and a heavy jacket. The officer noted it was 62-degrees outside. The officer believed the man was trying to conceal his identity.

When the officer attempted to speak to the driver, the 44-year-old Morgantown, Indiana man seemed nervous and began to look around, according to Pedigo. So, the officer asked the man to turn around to be placed into handcuffs, but instead, the man pulled away and attempted to run from the officer.

The officer grabbed the escaping man by his heavy jacket, and both he and the suspect went to the ground. Meanwhile, the man struck the police officer in the back. The officer began to yell for assistance.

The man is being charged with two level 6 felonies: battery against a public safety official, and resisting law enforcement.