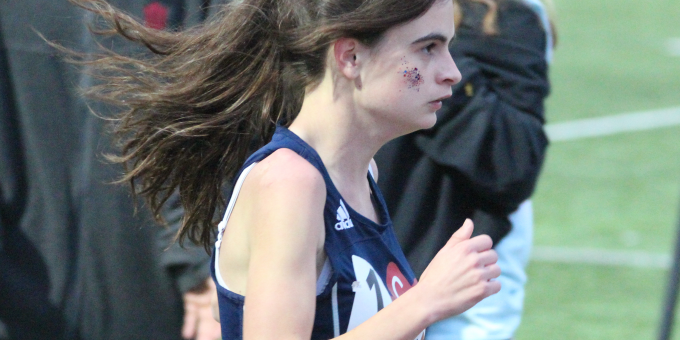 BEDFORD – The little engine that could, finally did.

Grace Tanksley, short in stature and stride but big in heart, chased down an elusive goal, setting a school record in the 3200-meter race during Thursday’s meet with North Daviess and Barr-Reeve. Bedford North Lawrence’s senior distance specialist churned across the line in 11:51.67, breaking the mark of 11:52.00 set by Vanessa Yeary in 2007.

Tanksley’s successful pursuit of history highlighted a BNL sweep of the meets. The Stars scored 82.5 points in the girls meet, followed by the Vikings (49.5) and Cougars (35). In the boys meet, BNL cruised with 129.5 points, while North Daviess totaled 21 and Barr-Reeve finished with 16.5.

Paced by BNL teammate Alex Nicholson (the races were run simultaneously to save time), Tanksley stayed in his draft until the final lap, when he pulled away to win the boys race in 11:46.38. She kicked into overdrive for the stretch run, then raced to hug family and friends when the time was official. And this was after she had already run – and won – the 1600 in 5:57.50.

“I had people telling me I was good enough, I would get it,” Tanksley said. “Having that in my head, instead of the negative thoughts, got me there.”

Runners have a lot of thinking time, and Tanksley was silencing her inner critic while listening to assistant coach Jill Vance shout out her pace time during each lap. She was her own worst enemy during recent meets, when her chase for the mark proved tough and futile.

“It’s hard to be proud when you set a goal and don’t get it,” she said. “I kept thinking, ‘Why don’t I run a little faster?’ I just couldn’t get it. I was just exhausted, tearing myself apart. I was telling myself ‘You should have done that.’ Not getting it hurt. So this is a relief, a weight off my chest.”

“Grace is like a little motor. It’s amazing,” BNL head coach Jim Lewis said. “I wish her legs were a little longer, she’d probably be on the Olympic team. She never gets tired. She does a great job.”

“With Lindley, she’s just a superior athlete,” Lewis said. “We’re doing everything we can to put her in things she excels at, where she can get to the state finals.”

“We had some kids in different things, and some of them were disappointed in the way the performed,” Lewis said. “I just asked if they gave their best effort. They said ‘yes’ so there’s nothing to be disappointed about.”

In the boys meet, Christian Garciano-Curren was a double winner in the 100 (11.91) and 200 (24.15), while Noah Carter leaped to the line first in the 110 high hurdles (16.12) and 300 low hurdles (43.06). BNL had another potential palm-slap-to-the-forehead moment when Zane Thompson missed the prerace command to “set” from the starter and was still crouched in the blocks when the gun sounded. Despite the head start he granted the field, Thompson still won the 400 in 53.59.

“I heard a few muffled sounds,” Thompson explained with a sheepish grin. “Then I head the gun, and I didn’t go because I never heard ‘set’. Everyone else went.”

“I liked how we competed,” BNL coach Brett Deckard said. “I knew we needed to push each other, they run harder.”