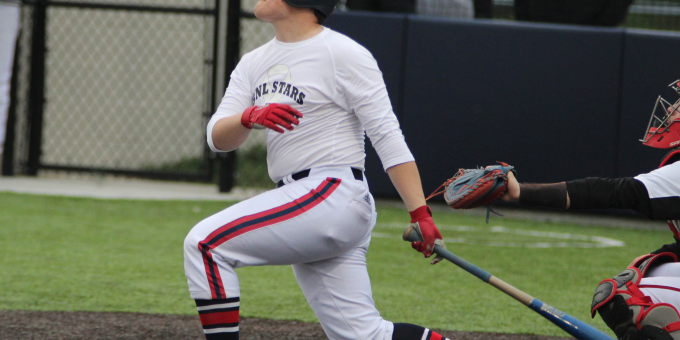 MARTINSVILLE – Bedford North Lawrence discovered the cure for an offensive drought was a big gulp of Artesian water.

“It was a much better bus ride home,” BNL coach Jeff Callahan said. “When we scored, the dugout erupted, the stands erupted, and we had to explain to Martinsville people so they got the idea why we were so excited. It was good to get on the board, good to built that lead. It was a good night of baseball.”

BNL broke out with a run in the second. Kline Woodward led off with a single, stole second, and Bennett came through with a two-out single to center to end the slump. That set the tone for a four-run third that gave the Stars control and confidence.

Cal Gates started the rally with a single to left. Martinsville misplayed Grant Dalton’s bunt, an error that allowed Gates to race home. Stone followed with his first homer to left for a 4-0 advantage, and BNL fashioned a two-out surge with Kylar Fisher’s single, Trace Rynder’s walk, and Bennett’s second clutch RBI hit.

Stone hammered his second home run leading off the seventh. BNL had hit only one home run (by Ryker Hughes against Evansville North on April 2) all season until his personal eruption.

“That was good to see,” Callahan said. “Jonny has some power. He got around on a couple of pitches.”

Stone, Bennett and Gates all had two hits for the Stars.

Woodward (2-1) went the distance on the mound, allowing only five hits and a lone run in the fifth. Kevin Reed had two hits and drove in the run for Martinsville.

BNL will compete in the Raider Hardball Classic at Southridge on Saturday, facing Heritage Hills at 12:30 and either Southridge or Lanesville in the second game.