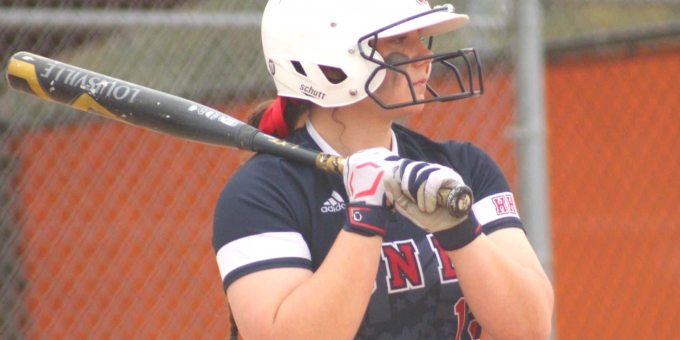 COLUMBUS – Bedford North Lawrence took another powerful step toward the Hoosier Hills Conference title, flexing its offensive muscle during a 14-0 victory over Columbus East on Friday.

The No.3 Stars (14-1 overall, 4-0 as they defend the league title) blasted four home runs, three of them were 3-run bombs, while overwhelming the Olympians. Annie Waggoner was also at her best, allowing only one hit to punctuate a complete team performance.

BNL, playing on the road, on a dirt-field venue without lights, didn’t mess around. Time was critical factor.

“There are times it takes us a while to get going,” BNL coach Brad Gilbert said. “It was a little concerning. If we’re not ready, it can be a challenge. Once we got going, we scored in bunches and hit well top to bottom.

“I challenged them a little bit about being more ready and attacking. After that we came out and hit it hard.”

BNL was quiet until the third inning, then exploded with terrific force. The Stars scored six in that frame, highlighted by Ava Ratliff’s sacrifice fly, Carlee Kern’s 3-run bomb and McKaylin Turner’s RBI single. Ratliff, who continues to lead the state in home runs, crushed a solo homer (her 14th of the year) in the fourth.

Waggoner (11-1) worked the first four innings in the circle and only allowed a lead-off single to the opposite field by Kaylee Cole in the fourth. She struck out 7, and Hayley Davis closed out the final inning.

“Annie was throwing well,” Gilbert said. “Then Hayley came in and threw strikes to close it out.”

Lauryn Anderson, Waggoner and Bennett had two hits apiece as the Stars totaled 13 hits, six for extra bases. BNL has now slugged 32 home runs this season, bearing down on the record it set last season with 45.

“It was nice to see the kids make the adjustment to play and square the ball up,” Gilbert said. “We have to feel good about going into tomorrow.”