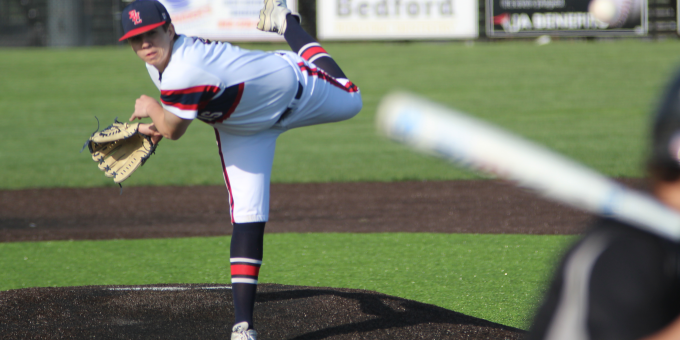 Bedford North Lawrence is mired in a streak it would rather forget and erase. And the longer it lasts, the more the frustration level rises. For the third straight game, for 22 consecutive innings, the Stars have failed to score. Difficult to win without doing that.

The Stars certainly generated enough hits, collecting 10 against Barr-Reeve on Wednesday afternoon. That’s normally a barometer of success. But BNL had two runners cut down at home plate, had two more cut down at first, and stranded seven on the base paths during a tough 1-0 loss to Class A No.3 Barr-Reeve.

BNL sophomore left-hander Cade Mungle was spectacular, going all seven innings and allowing only five hits and fanning seven, But the Vikings scratched across a run in the fifth, aided by a key BNL error, and that was all Barr-Reeve starter Lane Graber needed as he went the distance, pinning another hard-luck loss on the Stars (6-7) during a classic pitcher’s duel.

“In close games, the team that makes fewer mistakes usually wins,” BNL coach Jeff Callahan said. “It’s like basketball and football. Fewer turnovers will give us a better chance to be victorious.”

Barr-Reeve’s lone run exemplified that point. With one out, Keshawn Graber drew a walk, and pinch runner Tyler Graber (yes, there are six with that identical surname on the roster) stole second. Donnie Miller hit a soft ground ball down the third-base line, and Kline Woodward’s difficult throw sailed wide down the right-field line, allowing Tyler Graber to race home.

And that would be the lone footprint on the plate. Although BNL definitely had its chances to leave a mark.

In the first, with two outs, Jonny Stone stroked a double to center. With pinch runner Maddox Ray on second, Kline Woodward drilled a ball into the hole that BR shortstop Ethan Stoll grabbed but couldn’t get Woodward at first. As that throw went across, Ray raced around third and headed for home, but BR first baseman Seth Wagler was alert and gunned him down.

In the fourth, Stone led off with a single, and Ray (pinch running again) took off on a hit-and-run as Woodward drilled a drive to deep left-center. Barr-Reeve’s Reed Thompson tracked down that missile and doubled Ray off. Of course, BNL followed with two more hits that inning.

And in the fifth, Nate Pemberton singled to center and Cal Gates dropped a beautiful bunt single. Grant Dalton singled to right, but the Vikings executed a perfect relay – Miller to Lane Graber to catcher Keshawn Graber – to nail Pemberton at the plate.

“The second one was bad on my part,” Callahan said of the decision to send Pemberton. “If we don’t try to score, we have the bases loaded with our 3 and 4 guys up to get hacks at it. But they made plays. They made the plays they needed to make.”

“We’ve been very shaky defensively,” Barr-Reeve coach Trevor McConnell said. “As good as Lane was, he had some really good defense behind him. They had the potential for some big innings, and we made some plays behind him to stymie the momentum.”

Graber the pitcher, now 2-1, was good indeed. While Stone and Kylar Fisher both had two hits, he got the big outs and needed only 88 pitches to register the shutout. Miller also made a slick diving catch down the right-field line to end the sixth and save a run.

“He’s always got a plus fastball, but he commanded his breaking stuff and showed it just enough to keep those guys honest,” McConnell said of his hurler. “He competed around the zone. He wasn’t trying to be too fine, he trusted his stuff.”

Mungle was equally impressive, needing only 89 pitches for the complete game. He induced 10 fly-ball outs.

“That changeup was filthy,” McConnell said. “We were out front all day. He did a nice job of mixing his pitches.”

In fact, BNL’s pitching during the offensive skid has been exceptional. The Stars have lost 2-0, 4-0 (in 8 innings on a walk-off grand slam) and now 1-0 during the slump, and six of those runs have been unearned.

“Our pitching has been unbelievable,” Callahan said. “They’ve done everything to put us in games and give us opportunities. We haven’t done anything offensively. Hopefully at some point we will unleash on somebody.”

The Stars will get that chance on Thursday when they host Borden.