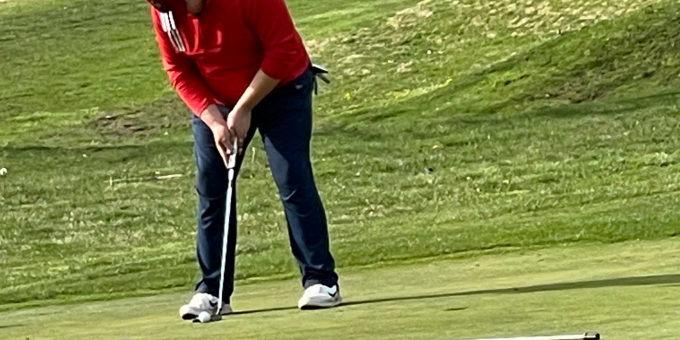 With scoring from deep in the lineup, the Stars posted a nine-hole victory over New Albany during a front-nine tour of Otis Park. Ayden Stiles, playing the last spot in the cast, came in first as BNL carded a 165-177 triumph on Thursday afternoon.

Stiles, who had almost as many birdies (three) as everyone else on the course combined (four), fired a 3-over 40 to earn team medalist honors from the eighth spot in the lineup. Dylan Endris and Colton Staggs added 41s, powering the Stars to victory without frontman Trevin Hutchinson (who missed the match while attending the annual Scholarship Foundation awards program for seniors).

Stiles made a swing adjustment on the range during pre-match practice and made that change work. He carded birdies on the tough third (hitting an iron to four feet), the par-5 sixth, and the short seventh. He stumbled on the final hole with his second double-bogey of the day.

”Everything went well today,” Stiles said. “I was having a lot of trouble with my irons. On the range, I worked with Coach and made one adjustment, started hitting it really well, took it out to the course, carried on from there.”

Endris birdied the par-5 fifth, lobbing a wedge to three feet to set it up. Staggs was consistent with six pars until balking on the final two holes. Jett Jones (birdie on six) and Tyler Bellush capped the team scoring with 43s.

“Scores definitely need to go down,” Endris said. “Hopefully we have that this coming week and improve from there. I’m starting to get my driver down, hit more fairways. You can’t hit a good second shot if you’re not in the fairway. I have to put myself in better position.”

The Stars adjusted to the soft conditions, with mud tending to stick to balls, and extra distance from the warmer weather. That’s more typical of the game, rather than the brutal survival tests of recent outings.

“It’s time,” Hein said. “We probably had some shots tonight we haven’t had a lot of practice on. You have to learn to play that way. All in all, it was good to get them some experience.”

Blaine Hamilton had the round of the day for the Bulldogs, posting a 1-over 38 that included a birdie on five.

BNL will compete in the Corydon Invitational on Saturday.