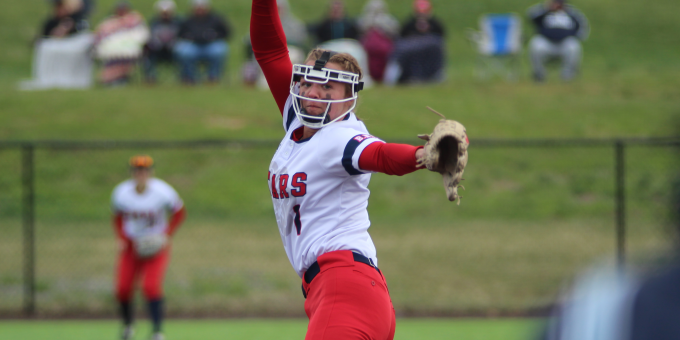 JEFFERSONVILLE – After flirting with perfection, Bedford North Lawrence ace hurler and Indiana State recruit Annie Waggoner had to settle for a victory. And that’s not too bad, after all.

Sizzling and sensational, Waggoner came within one pitch of a possible perfect game, surrendering a two-out single in the bottom of the sixth inning, while powering the No.5 Stars to a 4-0 shutout of Jeffersonville on Wednesday night.

Ava Ratliff and Aliza Jewell bashed home runs, while Waggoner and Jewell combined for the one-hit wonder as BNL (11-0 overall, 3-0 atop the Hoosier Hills Conference) took another step toward defending the league championship. Waggoner (8-0) struck out 8, with her only glitch a single to left field by Jeffersonville’s Bethany Clarke (the ninth batter in the order).

“That’s not bad at all,” BNL coach Brad Gilbert said. “She was dealing again, hitting her spots really well. She just reached back and threw hard. And there were a lot of plays behind her. But she kept them off balance. We pitched well. Aliza was lights out, too, We’ll take that every night.”

BNL’s offense struggled against Devils starter Bailey Shafer, who scattered 10 hits and kept the Stars frustrated until some late-game bombs. Lauryn Anderson got BNL started in the first, singling to center, stealing second and scoring when Carlee Kern reached on a two-out error.

That was all the noise until Ratliff connected for a two-out solo blast to center in the fifth, adding to her state-best total with her 12th homer of the season. Jewell went deep with one out in the sixth for a 3-0 advantage, and Anderson instigated another run in the seventh with an infield single. She moved to second on an error and raced home on Waggoner’s RBI single.

“The wind was blowing in, and we hit the ball on the nose a couple of times that got caught,” Gilbert said. “We couldn’t get anything big going. We didn’t get that key hit. That’s just part of it. You can‘t be too upset. It was one on the road against a conference team. For playing two tough teams (including Floyd Central on Tuesday) two nights in a row, we’ll take it. That’s two huge wins.

“We’ve played three tough teams in the conference so far and finished well. We just have to keep it going and get better each time out. We’ll take one at a time. We’re not looking too far ahead.”

Anderson was 3 for 4 and Waggoner had two hits. Jewell struck out two in her inning of relief work.

Waggoner took the close call – her second after coming close to a no-hitter earlier this year – in stride.

“It’s definitely a mix of being frustrated and being happy with the win,” Waggoner said. “Being a pitcher, that’s a personal goal. But overall it’s about the team and any HHC win is a good win.”

BNL will visit Jasper on Friday.