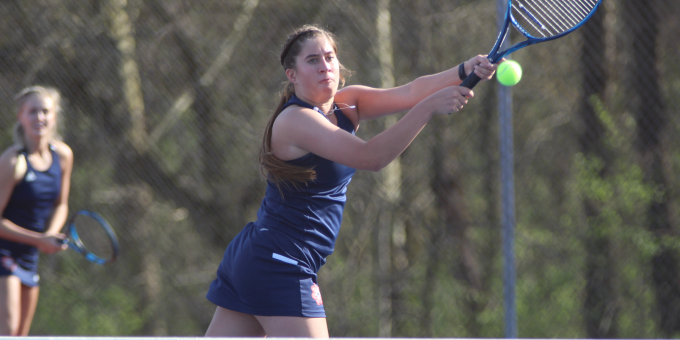 BEDFORD – The balancing act between aggression and recklessness is similar to a gymnast on the beam. Stay centered, maintain control, rely on intelligence more than sheer force. Bedford North Lawrence’s Bella Stigall and Mallory Pride shuffled those factors like jugglers, keeping a ball in the air, their feet on the ground and their opponents at bay.

BNL’s top, tough doubles duo took center stage during a high-level, smash-and-dash battle with Bloomington South on Tuesday afternoon, posting a three-set victory that sent a message to any tandem in that sectional. Take them seriously.

Turning up the dial to full throttle, those Stars, both close cousins and teammates, combined for BNL’s lone team point during a 4-1 loss to the Panthers. South had too much firepower across the board, dropping only four games in singles, but the Stigall-Pride triumph was a source of pride and a future inspiration.

Stigall and Pride combined for a thrilling 7-6 (7-1 in the tiebreaker), 2-6, 10-5 (in a super tiebreaker rather than a full third set) victory. They raced to 5-0 leads in both tiebreakers, balancing nerves with the will to win while hanging on.

Stress is part of sports, and this match had plenty. Momentum bounced back and forth during the first set, finally settling with the Stars when they posted a critical service break at 6-5 to force the tiebreaker. Their coach/mother/aunt declared quite loudly “I want the net”, and Joni Stigall’s advice/command was taken to heart. The Stars took the attack to the frontline and scored the key points.

“We were getting a little bit into watching the ball and letting the backline player do more,” Coach Stigall said. “I want everything done at the net. They’re figuring it out.”

After South’s Riley Walker and Maddie Santer flexed some power to win the second set, the shortened third set shifted BNL’s way. Stigall’s ace highlighted the surge to a 5-0 lead in the race to 10, and beautiful net volleys for putaway points from Pride (at 9-4) and Stigall (at match point) were ESPN worthy.

“We just stayed calm,” Pride said. “We were attacking the net, because that’s my favorite thing.”

Communication is critical in doubles, so perhaps the cousins have an advantage in that area. They’ve grown up together, played together now for two seasons. Their personalities balance perfectly. “She’s really good at making me laugh,” Pride said. “I get too serious sometimes.”

Well, their games are serious, and their talent obvious. When they can harness the aggressiveness, the urge to crush each shot rather than guide the ball to openings, they are a powerful combo.

“Placement over power,” Coach Stigall said. “We’re not the Williams sisters out here, so it’s placement. It’s hard when you want to shove it down their throat. The funny thing is they made a lot of errors. So to still come back and be able to beat a good team like that, it says a lot about how well they do play. When they cut the errors out, they’ll be hard to beat.“

“Keep my head in the game, focus on where I wanted to place the ball,” Bella said. “Not power, mainly placement. You just want smash it, hit it as hard as you can. But if you hit it too hard, it’s going to go out. So you have to think in your head where you want it to go first, then put power behind it.”

The Panthers controlled the other courts, although BNL’s No.2 doubles team of Kenley Craig and Izzy Alldredge made the Panthers sweat a little before Caitlyn Heim and Chelsie Lindauer carded a 6-4, 6-3 win. In singles, South rolled as Briah O’Neil stopped Becca Epping 6-0, 6-0 at No.1, Hailey Vandeventer topped Rachel Kidd 6-1, 6-2 at No.2, and Ava Rupp defeated Italy Lewis 6-0, 6-1 at No.3.

“They’re a good team,” Stigall said. “I saw good things, really good play. Unfortunately you don’t see that with the scores. There were times Becca had really great shots, took some points away that kind of shocked me, But that’s not in the score.”

BNL (1-1) will visit Linton on Thursday.