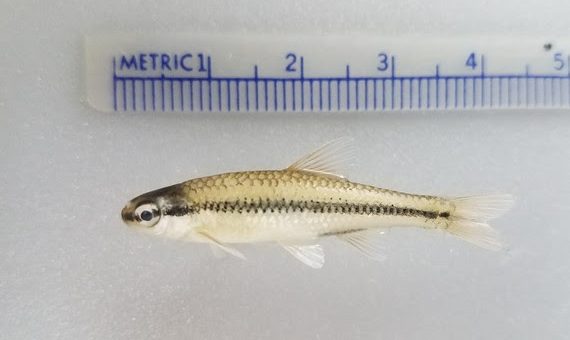 INDIANA – Most Hoosiers have probably never heard of or seen one of Indiana’s rarest fish species, the pugnose shiner. It is one of five minnow species currently on Indiana’s list of Species of Greatest Conservation Need. There are more than 50 different species of the minnow family (Cyprinidae) swimming in Indiana’s waters. The pugnose shiner is one of the smallest and most elusive.

Rarely exceeding 2 inches in length, the pugnose shiner exclusively inhabits lakes in the northern part of Indiana. It resembles another, more common northern Indiana lake inhabitant, the blackchin shiner. Both species have a dark stripe along their sides that extends to the tip of the snout and onto the chin. The pugnose shiner has a small, angled (almost vertical) mouth, whereas the blackchin shiner has a much larger, less angled mouth. Both species inhabit thick stands of submerged aquatic vegetation.

While historically known to be found in several lakes, the pugnose shiner has recently been detected in only one lake in Kosciusko County. The reasons for the species’ decline are not well understood. Some initial surveys for pugnose shiner in the fall of 2021 were unsuccessful in finding any new populations. An attempt will be made this upcoming field season to survey in the spring, summer, and fall to determine when the pugnose shiner might be most easily detected. While surveys to date have employed seining techniques, other methods may be investigated. Support monitoring efforts by donating to the Indiana Nongame Wildlife Fund.