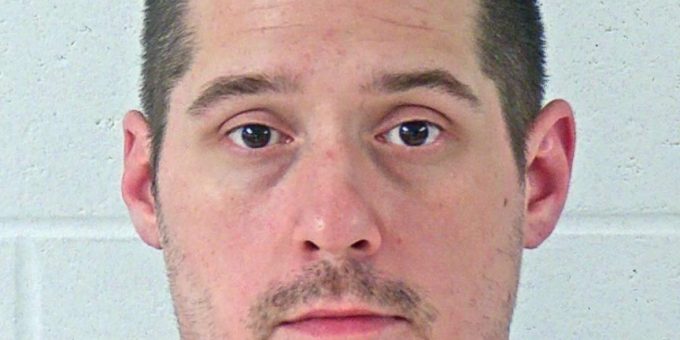 BEDFORD – A Bedford man was arrested when Bedford Police officers were called to an apartment on Ted Jones Drive Friday at 5:24 p.m. after a report of a physical domestic fight.

When officers arrived they spoke to a female who was standing in the parking lot. She was visibly upset and crying.

The woman told police she had been fighting with her husband, 36-year-old Gregory Magnus over an Emerald Card from H&R Block that had their tax refund on it.

She said Magnus lost his temper and pushed her into the baby changing table.

She said Magnus then choked her and she could hardly breathe, there was tightness on her throat, and she couldn’t swallow. She told the officer she began to scream for help approximately four times until Magnus placed his left hand over her mouth. She stated she was able to get away, however, Magnus managed to grab her from behind and placed her in a chokehold. She advised she started to kick at him and was able to get away. She stated she called 911, during which Magnus tried to get the phone away from her but was unsuccessful. The couple’s children were in the other room during the incident.

The woman said Magnus was upset because she was spending the tax money on other items instead of repaying the father’s money they owed him.

Magnus told police he went to pull the card out of his wife’s back pocket when she shoved him. He told police he did lose his temper and the argument turned physical. Magnus denied choking the woman, but he did admit he pushed her into the baby changing table. He stated that when she began to yell, he placed his hand on her face. He explained that he was not entirely covering her mouth, and then she stopped yelling.

A person then came into the room and that is when the argument stopped.

The woman declined medical treatment or file charges against Magnus.

Magnus was arrested on charges of domestic battery and strangulation.