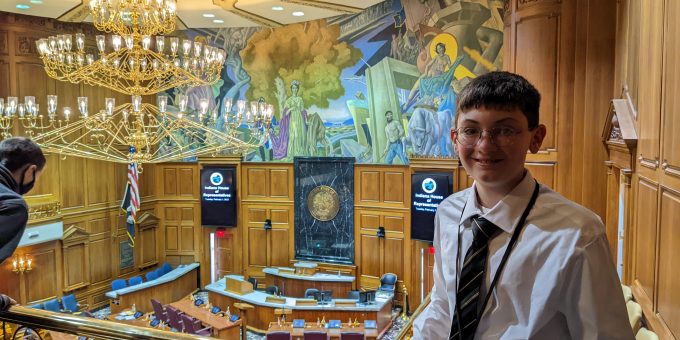 I am Jacob Burrus, an 8th grader at Oolitic School and a member of the Lawrence County 4-H program, as well as, a Jr. Leader. I had the most incredible opportunity to go with other 4-H members throughout the state to the Indiana State House on February 1, 2022.

The first thing that happened was many people talked to us to give us a little information about what to expect of the Day at the State House event. While I was there, I was able to experience some unimaginable things like visiting the House of Representatives and the Senate, taking a tour of the State House, meeting Governor Holcomb, and going into his office.

I learned a lot about the House of Representatives while at the statehouse. The spot where the 4-H members were sitting is called the Gallery. There is a mural in the back of the House of Reps. that was made by an 82-year-old Indiana man and it was one of his last works.

The tour of the State House was very informative. I toured the statehouse with a guide which really helped me get ahold of many pieces of information, like how the State supreme courtroom is authentic to when it was first built in the later 1800s (with many renovations of course). And how there are eight 9 ft. tall statues in the center of the State House that are made out of granite from Maine that was sent to Italy to be carved, then sent to Indiana, and then finally put
into place.

I also noticed that most of the lighting inside the State House is natural lighting from the sun. I then learned that the Indiana State House is one of the last State Houses to have all 3 branches of government (Legislative, Executive, and Judiciary) in the same building.

Meeting Governor Eric Holcomb was an amazing experience. He told us a lot of things about his job and how things are run. Also, he mentioned all the portraits/pictures on his walls and what they meant to him. A couple of the people on the wall are Madame C. J. Walker and George Rogers Clark. Madame C. J. Walker is up there because she was the first female millionaire. George Rogers Clark is up there because he was an amazing leader.

Gov. Holcomb told us that the reason he looks up to them is because of how they were symbols and leaders and he
wants to be as good a leader as they were.

This is just a very short explanation of what happened at the Statehouse. Honestly, to grasp the whole concept, you just need to go there yourself. I can’t put into words how beautiful the State House is. All the cool architectural designs and the decorations are surreal. Going to the State House was an AMAZING experience and I would encourage others to go. I would also like to thank the Statehouse for allowing us to go there and learn about how Indiana is run. The
people there were so nice and generous with the information about the statehouse, that it was hard to keep up. Definitely worth the trip.