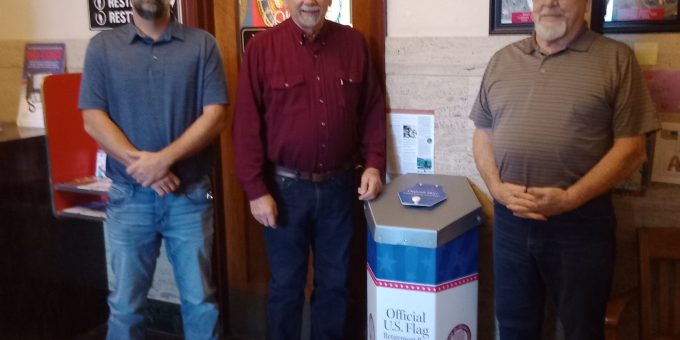 BEDFORD – Residents can now dispose of their worn-out and tattered flags at the Lawrence County Courthouse.

The U.S. Flag Code says, “The flag, when it is in such condition that it is no longer a fitting emblem for display, should be destroyed in a dignified way, preferably by burning.” When an American flag is worn beyond repair, it should be retired in a respectful manner.

The American Legion passed a resolution about flag retirement ceremonies in 1937, and they’ve been an important ritual ever since. According to the resolution, “The approved method of disposing of unserviceable flags has long been that they are destroyed by burning.”

The U.S. flag is considered such a sacred symbol that burning it in an undignified manner constitutes desecration. That’s why the ceremonies are held in a specific manner.

Once the box is full, the flags will be taken to the American Legion on X Street in Bedford to be properly disposed of.

Every year on June 14, Americans celebrate Flag Day. Not surprisingly, it’s considered the most appropriate day to hold flag disposal ceremonies, which are often held at night.

During an American Legion ceremony, participants stand aligned in two parallel rows about 20 feet apart, facing each other. A fire is started that is large enough to completely burn the flag beyond the rows of members, opposite the Legion commander.

The flags that are no longer serviceable are presented to Legion commanders, who inspect them to make sure they should, in fact, be discarded. When it’s agreed upon that they’ve reached their current worn state due to proper service of tribute, memory, and love, a color guard presents the colors and a chaplain offers prayers.

During the ceremony, the flag will be folded in its customary manner. Instructions for properly folding a flag can be found here. The flag should not touch the ground in the process.

As the crowd salutes, the flag detail dips the retired flags into kerosene and the flag is respectfully placed on a rack over the fire. A bugler sounds “To the Colors.”

The flag should be thoroughly burned so that nothing besides ashes is left. Finally, the ashed are buried.

Anyone can hold a flag disposal ceremony. Whoever chooses to retire a flag should only proceed in a way that is respectful and dignified.

The Stars for our Troops program also accepts worn-out American flags. A volunteer for the program will cut out and send the flag’s embroidered stars to an American soldier.

Although the U.S. Code says that burning is the preferred method to dispose of a flag, people also do so via burial. If you choose this method, place a folded flag in a dignified wooden box. Pause for a moment of silence after burying the flag box in the ground.

A final option for disposing of a flag is to recycle it. Some flag companies will accept old flags and use the material to make new ones.