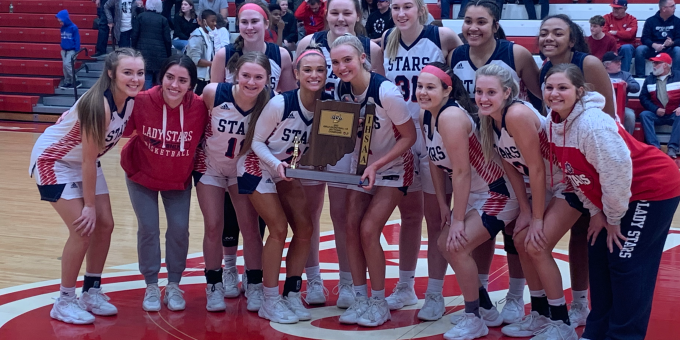 JEFFERSONVILLE – Heaven for Eleven? Winning this one was just the opposite. No pearly gates or streets of gold, just a trophy that means the world.

Bedford North Lawrence, pushed to the limit, struggling with the weight of expectations and the will of an opponent that carried her team to the brink of a stunning victory, survived, going through Hades for a crown. With the offense in tatters, with Jennings County star Juliann Woodard causing havoc and panic, the No.3 Stars had two factors in their favor – defense and guts. And that was enough to win another sectional championship.

Chloe Spreen, rising to the occasion on the wings of angels, scored BNL’s final five points and collected the biggest steal of the season as the Stars fended off the Panthers 38-36 in a high-intensity, low-quality, white-knuckle clash for the Class 4A title at Jeffersonville on Tuesday night. BNL (23-2) advanced to face Castle in the regional semifinal at Columbus North on Saturday.

The Stars extended some phenomenal streaks, winning their 11th consecutive sectional title, their 33rd straight sectional game, and their 23rd straight over the luckless Panthers, who had a trey in the air at the buzzer to end all of that futility and frustration. That shot rimmed long, allowing the Stars to exhale and celebrate while the Panthers (17-7) walked away to contemplate what could have been. Again. That’s four straight losses to BNL in sectional finals, and this one had to be the hardest to take.

BNL was vulnerable, exposed for the upset as shots missed at an alarming rate, as Woodard dominated the paint on both ends. Even after Jennings lost sophomore guard Alivia Elmore for the second half with a right leg injury, the Panthers had their chance.

The Stars know that. Fortune favors the bold, or in this case the gritty. BNL had to get dirty for this one, relying on defense because nothing else worked.

“Winning 11 in a row is tough, I can tell you that,” BNL coach Jeff Allen said. “We won with some guts, that’s all we had left. It’s one of the toughest ones we’ve had. It could have gone either way.”

Here’s the final scene. Jennings owned a 34-33 lead when Spreen went to work, scoring off a sharp Mallory Pride pass. After regaining possession, the Stars killed time while Jennings fouled enough to reach the one-and-one bonus, and Spreen made two free throws with 54 seconds left. Woodard, so spectacular in defeat, scored in the post, cutting the deficit to 37-36 with 40 seconds remaining.

Spreen made another free throw with 24 seconds left, and those final moments were wild, with a lot of breath holding. After a timeout, Jennings went to Woodard on the baseline, and she attempted to back down Pride for a close-range look. But as she spun, Spreen attacked with a trap and came up with the steal. She was fouled with 6.9 left.

But Spreen missed. Woodard grabbed the rebound, launched a long pass ahead to teammate Kali Thompson, who shoveled the ball to wide-open Madelyn McIntosh on the right wing. She fired, with history hanging on each revolution of the ball, but it bounced off the back iron.

Whew. If anyone was chewing gum, there was no flavor left.

“That game just made me a little older,” Allen said.

Woodard was the aging agent. She scored Jennings’ first 7 points, grabbed every rebound (and there were a lot of them as the Stars were 13 of 50), and swatted shots in the paint like flies on the screen door. The Panthers rumbled to a 16-11 lead before BNL ended the first half with a 9-0 burst, fueled by Karsyn Norman’s wing 3-pointer, Spreen’s steal for a layup, and Pride’s wing bomb. When Elmore was carried off the court, the end seemed inevitable.

But BNL kept firing blanks, and Jennings seized the opening. Alexis Carson came off the bench to make BNL’s life even more miserable, hitting three treys. Lily Ernstes worked loose for a layup and a 31-30 advantage early in the fourth quarter. Norman countered with a steal for a 3-point play, but Woodard’s jumper and Carson’s free throw for the 34-33 lead with 3:45 left set the stage for the fierce finish.

“I didn’t want to be the one to lose the streak,” Norman said. “We won, that’s all that matters. Our defense helped us. When our offense isn’t there., we have our defense to fall back on.”

Credit Jennings for some of the BNL misfiring. Woodard was there to turn away almost everything inside. She finished with 15 points, 21 rebounds and 7 blocked shots. Carson totaled 12 points and didn’t miss from the field. That’s high-level stuff, yet BNL found a way.

“It was definitely tough,” Spreen said. “We knew it would be that way from the get-go. Our team just plays so hard, I’m so proud of our team. I would rather have it this way than a blowout, it makes it that more special, playing as hard as we can.”

Jennings will rue the 23 turnovers, especially the last one on the Spreen theft. Everyone in Johnson Arena knew where the ball was going, but stopping it was another story. “I know her,” Spreen said. “I know her game. I saw that spin move coming.”

BNL cut down the nets for the 31st time in program history. Rest assured, no sectional champion has shot that poorly and lived to tell about it.

“It’s a difficult game if the ball doesn’t go in the basket. It’s just that simple,” Allen said. “We just didn’t make shots. It’s a tough game when you don’t. Against a good opponent, it’s going to be a long night. We missed layups, we missed open threes. That’s teenage girls and basketball.

“My kids gutted it out. You could tell Woodard was ready to play. We had trouble with her the whole game. We were lucky enough to make plays at the end.”

BNL will face a rematch with Castle in the second semifinal. No.2 Franklin will clash with East Central, a 72-67 winner over Columbus East in the final at Bloomington North as Josie Trabel scored a career-high 36 points, in the first semifinal.

“Huge shout out to our team,” Spreen said. “We’re not done yet.”