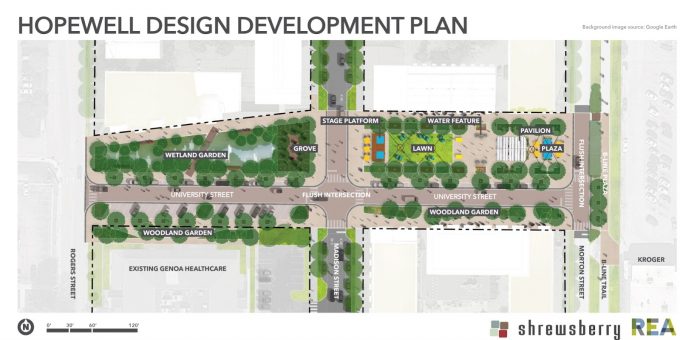 BLOOMINGTON – The City of Bloomington is pleased to announce that “Hopewell” will be the name for the new neighborhood to be created following the decommissioning and demolition of the former IU Health Bloomington campus on West 2nd Street. The Hopewell name has a long history of association with the site.

Shrewsberry & Associates, LLC submitted a Primary Plat with the Hopewell name for the City Plan Commission’s review and approval at their February 7th public hearing on behalf of the City of Bloomington Redevelopment Commission. The plat refers to this area as the “Hopewell Subdivision”, names the streets, and identifies the proposed new parcels for future development. This plat is focused on the block bound by 2nd Street, Rogers Street, 1st Street, and the B-Line. This is a necessary step to dedicate various utility easements and additional rights-of-way for facilities such as an extension of Madison Street from 2nd Street to 1st Street and a new east-west street to be named University Street between Rogers and Morton Streets.

In 1905, Bloomington’s Local Council of Women bought a 10-room red brick house that would become our community’s first hospital. The house, located on a portion of the acreage that became Bloomington Hospital and later IU Health Bloomington Hospital, once belonged to Isaac Hopewell. The property came to be known by that name, linking “Hopewell” to the site for generations to come. The Local Council of Women converted that home into the much-needed local hospital. The local activists and volunteers supported the hospital with canned goods, garden produce, fundraisers, and even raising chickens to help feed patients.

Serving as part of Bloomington’s hospital for nearly six decades, Hopewell House was eventually razed in the summer of 1963. The beautiful legacy of Hopewell House – residents taking action to care for each other – continues to inspire the many individuals working to ensure that this new neighborhood in the heart of Bloomington remains a place of compassion, good health, and perpetual optimism. More information about the history of the former hospital site, now known as Hopewell, can be found at https://bton.in/advRF.

The City contracted with Borshoff, Indianapolis-based advertising, and public relations firm, to assist with naming and branding the former hospital site. In the process of selecting the Hopewell name, representatives of the City and Borshoff conducted one-on-one interviews and small group engagement sessions with a variety of stakeholders. These contributors shared a broad variety of perspectives representing their diverse interests and expertise, including business, arts, environment and sustainability, healthcare and human services, development, education, community history, neighborhoods, and government.

“The Hopewell name captures a bit of the history of the site and at the same time projects an inspiring vision for its future. Generations to come will be influenced by the notion that this is a community with a long and proud history of people stepping up to take care of each other. Today, that means we must work together on not only accessible healthcare, but accessible greenspace, equitable housing opportunities, and a commitment to sustainability. We look forward to continuing to work together to build a neighborhood that reflects our core values,” commented Mayor John Hamilton.

Additional information will be posted at hopewellbloomington.org as it becomes available.