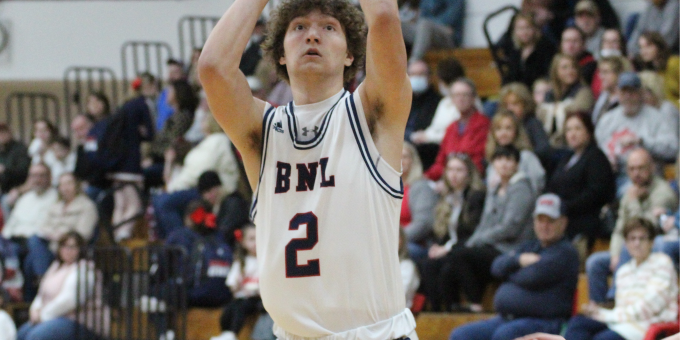 BEDFORD – Life on the road, treacherous for the experienced and grizzled, doubly difficult for the unseasoned, will test Bedford North Lawrence’s toughness. The Stars will start a five-game journey, to some of the more distinctive and brutish-reputation courts in southern Indiana, with a historic trip to Loogootee.

BNL will make its first appearance in Jack Butcher Arena since the 1983-84 season when the Stars clash with the Lions, ranked No.5 in Class A, on Tuesday night. So far, the Stars (7-7) have struggled away from BNL Fieldhouse, going 1-3. Of course, that’s a small sample size. That’s about to change.

Not only are the Stars hitting the road, they’re doing it in NBA style, playing their next six games over an 11-day span. There’s no breathers, no rest for the weary. Better buckle up for a bumpy ride.

“That’s a long time,” BNL coach Jeff Hein said of the five-game stint. “We’ll find out if we’re ready. It will be tough. Loogootee is a tough place to win. We need to play our way in (to the postseason), whether it’s home or road, we just need to play.”

The Lions (13-4) have lost only once to BNL on their home floor in the series that’s tied 6-6 overall. Most of that is ancient history, with BNL winning the last clash 51-33 in 2020. One of the familiar returning faces is Loogootee star Peyton Bledsoe, a 6-4 junior wing averaging 20 points per game. The Lions will also feature senior guard Luke Nonte (10.0) and junior forward Parker Arvin (10.0).

“Peyton is a do-it-all guy,” Loogootee coach Ryan Haywood said. “He’s a great scorer but it’s not a volume thing. He will make the good basketball play. We have trust in him to be that leader.”

Loogootee needs to establish flow and sync. The Lions played only three games in January, which is usually a busy month of games. Practice can get stale without the reward of competition.

“We’ve a lot of practicing but not a lot of playing,” Haywood said. “We need to pick it up a notch.”

The Stars will counter with the grinding, dribble-drive attack of guard combo Colten Leach (13.5) and Colton Staggs (12.3).

“They’re hard to guard and they’re physical,” Haywood said. “They rely a lot on those two guys and they’re tremendous players. I’m not surprised by what I see.”

Getting off to a fast start on the road trip could be crucial as BNL looks ahead.

“It’s almost like summer basketball from here on out,” Hein said. “Hopefully between now and then we can learn some lessons, in each and every game, and continue to develop. Our goal is to do well in the sectional, and we have a young team that needs to develop.

“These kids would rather play than practice. We’re all tired of practicing at this point. So it will be good to play games.”

Game notes: BNL is making its first trip to Loogootee since the 1983-84 season. The series is tied 6-6, but BNL has won only once at Loogootee.