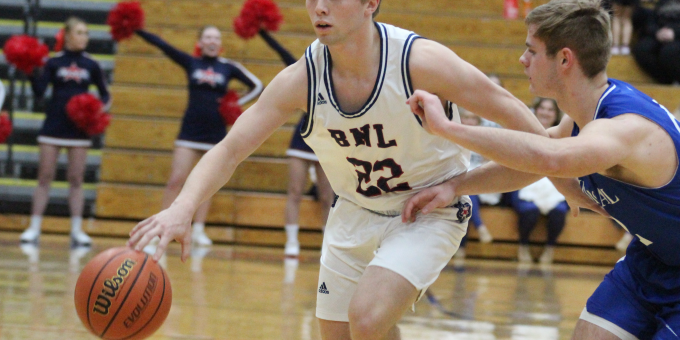 Memorial’s frantic final seconds ended with freshman Luke Ellspermann cutting free for a 12-footer in the paint, as good a shot as could be expected under the gun, and that miss allowed the Stars to escape with a 54-52 triumph on Saturday afternoon. Colton Staggs scored 20 points as BNL (7-7) recorded a key victory for a springboard into a looming five-game road trip.

The difference in a one-possession finish can be traced back to so many frozen-time moments, but this one swung toward the Stars on two critical ones to conclude each half. BNL’s improvisation came when sophomore Trace Rynders couldn’t see Colten Leach alone under the basket, which is exactly what BNL coach Jeff Hein had drawn on his coaching whiteboard during the preceding timeout. However, Leach drifted to deep right wing, collected a pass from Colton Staggs and swished a 3-pointer at the buzzer for a 28-17 lead.

That came into play much later, with the margin now two as BNL’s Kole Bailey stepped to the free throw line with 10.2 seconds left. He missed both, and the Tigers (9-8) attacked in a hurry, finding senior guard Connor Agler in transition. He encountered a double-team off a screen, looked right and found Ellspermann slashing into the paint. His floating one-hander rimmed out at the horn.

“We found a way,” BNL coach Jeff Hein, who sports the Marine hair cut and the stern approach, said. “It was a good team win.”

The Stars played their best in the first half, particularly during an 11-0 run to start the second quarter. Staggs started it with a daredevil drive through traffic, Rynders ripped two straight corner bombs, and Staggs dropped a wing trey for a 23-10 edge. Leach’s hero shot gave BNL a double-digit lead at intermission.

BNL, which hit six treys in the first half, went cold from distance in the second, and the Tigers roared back with a 13-2 burst, fouled by Ellspermann’s three baskets. BNL settled down and scored again just ahead of the third-quarter buzzer – with Jett Jones collecting a poked-free ball and hitting Bailey for a breakaway – and a 34-29 edge.

“Shooting the ball well has not been our characteristic,” Hein said. “We did shoot it well early. Sometimes it’s fool’s gold because you make a few and continue to shoot it. We fell in love with it. We needed paint touches, we had to get the ball to the middle of the floor.”

The Stars attacked inside once again and surged to an 8-point lead in the fourth quarter, the final time at 44-36 with 4:26 left. They still owned a 51-44 edge with 1:01 remaining following two Staggs free throws, but that evaporated rapidly as Leo Collins swished a 3-pointer, Ellspermann canned another one to make it 52-50 with 33 seconds left. Bailey beat the press for a layup, and Ellspermann came back with a layup for the 54-52 margin that played out over the final seconds.

“We put the ball in our best player’s hands and let him decide it,” Memorial coach Heath Howington said. “They did a good job covering it. Luke was phenomenal, in his third varsity start, so I’m pleased with the shot, an open look from a really good player. Unfortunately it didn’t drop.

Staggs had 11 points in the fourth quarter. Leach totaled 13 points and 7 rebounds, and Bailey added 9 points off the bench.

Ellspermann had 17 points and Collins added 13 for Memorial. But the key for the Stars was shutting down Agler, who was averaging 15.6 per game. He was limited to 3, with his only basket a tip of his own miss with 2:50 left.

“We rely on him a lot to score, get our offense moving,” Howington said. “Give credit to Leach. He’s a two-way player. We knew what he could do on the offensive end. But he really opened our eyes today on the defensive end, to hold a player like Connor to three points.”

BNL played a lot of 2-3 zone, especially in the second half with foul trouble forcing the change. Kaedyn Bennett eventually fouled out with 5:25 left, and Leach was hampered by four fouls. Again, BNL had to adapt to overcome.

“Our zone did a great job,” Hein said. “We went to the zone because we were in foul trouble, and it took away Agler’s slashing and driving to the basket. I didn’t want to play that much zone, but we had to. We had no intention of doing that, but that’s the way the dominoes fell. We gambled with Bennett, the same with Leach. You have to roll the dice sometimes. But we’ll take it. You have to give the kids a ton of credit.“

BNL will start its long road trip, and play the first of five in an 11-day span, on Tuesday at Loogootee.