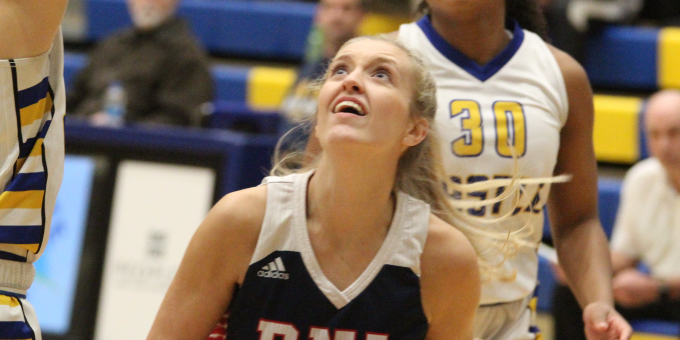 NEWBURGH – With all the loud trumpeting and fanfare surrounding Bedford North Lawrence’s new, envious status as the top-ranked Class 4A team in the state, it was the quiet kids who kept that position intact in the first performance with that heavy marquee title.

Bailey’s corner bomb gave BNL its final lead, Kern calmly swished two clutch free throws after a rebound of a missed free throw, and Spreen totaled 20 points as the Stars scurried to safety with a tense 47-43 victory over No.13 Castle on Saturday afternoon. Mallory Pride added 10 points as BNL (16-1) remained unbeaten against Indiana competition and fought off a terrific challenge from an unintimidated nemesis.

After Castle reserve Keira Moore swished her third straight deep 3-pointer, right in front of her giddy bench, to force a 39-39 deadlock, and force pressure on the Stars to answer, to prove and protect that ranking, Bailey’s shot from the left corner – her only basket of the day – put BNL in front to stay. And when Spreen missed a one-and-one free throw with 5.8 seconds left, Kern’s scrambling grab of the board and her two shots with 2.4 remaining secured BNL’s toughest, grittiest win of the season.

“I knew coming down here would be a tough game,” BNL coach Jeff Allen said after exhaling some tension. “You don’t understand that until you play them. We had to battle it out for a close win. I’m happy to get out of here with a win. It’s a quality win on the road.”

BNL had chances to create separation and sensed that necessity, but the Knights (12-4) refused to bow. Moore, on the far left wing, went swish, swish, swish, the last bomb with 2:50 left, and BNL could have trembled and tightened under the duress. That’s when Bailey, whose playing time was limited by foul trouble, stepped into the void for the biggest shot of her young career. Sophomores aren’t supposed to do that, are they? She embraced the moment, and shrugged off its importance later.

“I wasn’t really worrying about the missed shots,” she said. “I just had to keep shooting.”

“Basketball is a medium to life,” Allen said. “You have a day where you struggle, then you find a moment where it all comes together. I’m happy for her, that she had the courage to pull the trigger on that shot, because she had a tough day. That’s what makes it special, you have to have those kids to step up and do that.”

Spreen followed that Bailey blast with an 8-footer on the baseline for a 44-39 lead. Castle answered with two free throws by Megan Kain, and Karsyn Norman made one from the line with 33 seconds left. Ky Hay-Swope popped a 15-footer to make it 45-43, and Spreen got fouled in the backcourt. She back-rimmed her chance long, but Pride swiped the ball in Kern’s direction, and she won the scramble. If Castle secured that board, anything could have happened in a closing rush.

“I saw the rebound, saw somebody grab it and tip it around,” Kern said. “I didn’t think I would get it at first. I was ready to shoot the free throws.”

“Missed block out,” Castle coach Bob Meier said. “You get to that point, that’s where you fight your rear end off and make sure you get the ball. Not them, us. They wanted it a little more.”

The prelude to the final chorus was a defensive masterpiece. Castle took away Norman, who was coming off a career-best game but managed only one bucket. BNL blanketed Castle standout Natalie Niehaus (who hit 2 of 13 shots) and dared someone else to play a solo. Moore, who was hardly mentioned on the BNL scouting report, played some sweet string music with her late explosion and scored 12 points.

For the Stars, balance was key. Pride scored six early points as BNL took a 13-8 advantage, Spreen went to work with three consecutive baskets, and Ella Turner fed Kern for a wing trey and a 22-15 lead that would be BNL’s biggest. After the Knights battled back even in the third, Spreen’s 3-point play and pass to Kern for a layup built the margin back to 32-27. That set the stage for the finale that left few with fingernails after a lot of nervous chewing.

“We’re pretty relieved,” Kern said. “We always knew it would be tough coming here. It always is.”

Kern finished with 10 points and six boards, the same numbers as Pride. BNL, after getting humiliated on the boards by a 16-7 count in the second quarter, ended up almost even in that stat.

“Huge, huge,” Allen said of the Kern contributions. “She’s been a warrior all year long. I’ve been so proud of her. What a senior year she’s having. She a big reason why we’re having the success.”

“That’s what role players do,” Meier said. “That’s the value of having a program that believes in itself and commits to doing whatever it takes to be successful. We had good fortune with Norman, but others stepped up. They had some girls hit some big shots.”

Hay-Swope had 9 points and Devyn Barton added 8 for the Knights, who made BNL squirm despite hitting only 30 percent of their shots.

“That’s just how they are, that’s who they are,” Allen said. “It’s not going to be fun every day. Sometimes you have to work and get through it. They kept finding a way. We had to play with that level of effort, because that’s the level they came after us with.”

Then he finally allowed a smile. The head wearing the crown can be uneasy.

He’ll care more about the next one. The Stars will host Columbus East in a showdown for the Hoosier Hills Conference championship on Tuesday.