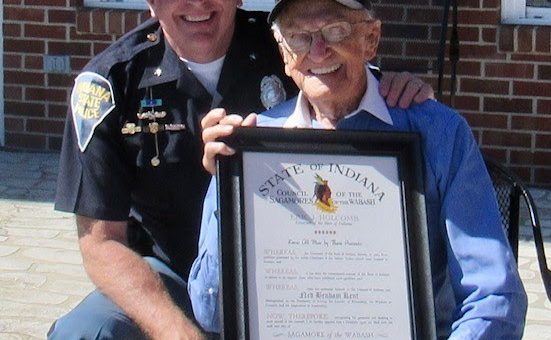 DAVIESS CO. – Friday, Ned B. Kent, 104-year-old World War II veteran, was celebrated at an event in Washington, IN, where he received the highest honor the Governor of Indiana can bestow, the “Sagamore of the Wabash”.

Indiana State Police Superintendent, Doug Carter, presented Kent with the award today in Washington on behalf of Governor Eric Holcomb. Superintendent Carter helped petition for Kent to receive the award, after they met during memorial services at the State Police Post in Jasper, IN. Retired Trooper, Gordon Hochmeister, has brought Kent to the memorial service on several occasions.

Kent was born in 1920 in Greene County, IN, and is number 5 of 7 children in his family. Kent graduated from Sandborn High School and from Lockears Business College.  Kent was drafted by the US Army in January of 1941. Kent served four years and nine months in the US Army, serving in the European Theater of War in Africa and Italy.

When Kent returned home after World War II, he bought a small business selling agricultural lime to farmers. Kent sold the agriculture lime business after a few years and bought a flower shop and greenhouse in Sandborn, IN, which he ran for 27 years.

On December 19th, 1948 Kent married Adelyne Benham. They had 2 sons, Mark and Jeff. Mark and his wife, Marilyn, live in Sandborn and Jeff and his wife, Mary, live in Chicago, IL. Kent also has 5 grandchildren and 4 great-grandchildren.  Kent and Adylyne were married for over 71 years before Adylyne passed away.