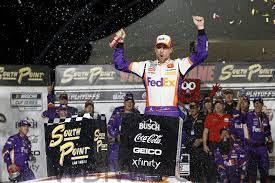 LAS VEGAS – Denny Hamlin of Joe Gibbs Racing (Toyota) was the winner of the South Point 400 at the Las Vegas Motor Speedway.

Denny Hamlin won the South Point 400 to score his 46th career NASCAR Cup Series victory, his second of the season, and his first at Las Vegas. His margin over second-place Chase Elliott was .442 of a second.

There were four caution periods for a total of 21 laps. Only 12 of the 38 drivers in the South Point 400 finished on the lead lap.

“I thought our One Cure Ford Mustang was going to be really strong when the sun went down, but we just couldn’t get the handling right,” Briscoe said. “The smallest changes would take it from loose to tight, and it was really tough to get it exactly where we wanted it. Fourteenth is still a huge improvement over what we did earlier this year, and it just shows how much I’ve learned as a driver and how far this team has come.”

The driver of the No. 14 One Cure Ford Mustang was 17th when the competition caution was called on lap 25. He explained to the team that the back of the car didn’t have enough grip, but he thought the car would improve as the sun went down. He pitted for tires, fuel, and chassis adjustment and restarted 14th on lap 31.

Briscoe maintained his position within the top-15 and completed the first stage in 14th. At the break, he pitted for an additional chassis adjustment.

Briscoe started the second stage on lap 88 in 11th but was caught in the less favorable lane and dropped to 18th before the yellow flag was shown on lap 93.

The lead-lap cars all pitted for tires under the caution, but the One Cure team made a second stop to tighten lug nuts and top off on fuel. Briscoe lined up 25th for the lap-99 restart.

The Cup Series rookie drove his way into 13th by the end of the stage. He radioed to the One Cure team that his car was improving as the track changed and asked for no adjustments during the pit stop at the stage break.

After restarting for the final stage on lap 167, Briscoe drove into the top-10 on lap 172.

On lap 188, after falling back to 16th, he reported the One Cure Ford Mustang was too loose in the back.

Briscoe made his scheduled green-flag pit stop on lap 211 and received tires, fuel, and a track bar adjustment.

He returned to the track in 21st, one lap down, and drove his way into the 12th position on lap 240.

As the balance of the car began to change once again, he slipped back to the 14th position, which is where he crossed the line on the final lap.

Briscoe earned his ninth top-15 of the season and his first top-15 in two career starts at Las Vegas. Briscoe was the highest finishing NASCAR Cup Series rookie for the 26th time this season.

Briscoe’s 14th-place result bettered his previous best finish at Las Vegas – 21st, earned in his first visit to the track in March.

The next event on the NASCAR Cup Series schedule is the YellaWood 500 on Sunday, Oct. 3, at Talladega (Ala.) Superspeedway. It is the fifth race of the 10-race playoffs and the second race in the Round of 12. It starts at 2 p.m. EDT with live coverage provided by NBC and SiriusXM NASCAR Radio.