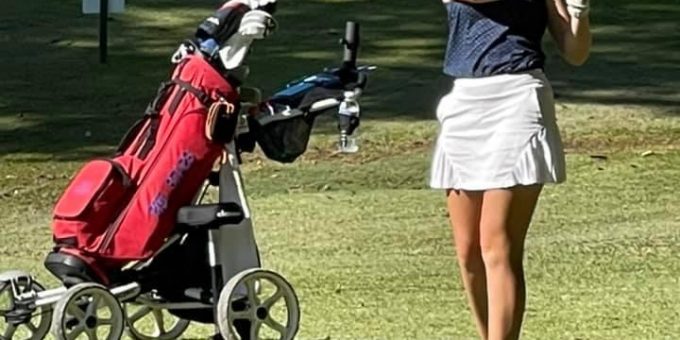 MONTGOMERY – Bedford North Lawrence capped its 2021 season with a 12th-place finish in the IHSAA regional at Country Oaks on Saturday.

No.1 Evansville North, the defending state champion, set a state record with its eighth consecutive regional championship, posting a team total of 293. No.4 Castle was second with 312, and No.9 Floyd Central was third with 322. The top three teams in the 18-team field qualified for the state finals at Prairie View on Oct. 1-2.

“It would have taken a perfect day to get out, but they expected lower scores out of themselves,” BNL coach Kori Johnston said. “I‘m still proud of them for winning the sectional. Even though they didn’t have their best rounds, at all, they hung in there.

“That’s one thing, as a coach, I was really impressed with, how strong their mental games are getting. Even when they weren’t playing well, they were still fighting.”

Chloe McFaddin paced the Stars with 91. Samantha Biel posted 97, Ellie Horton fired 98, and Nora Howat was inserted into the lineup on Friday when senior Daphney Sproles was diagnosed with a fractured patella in her right knee. Howat capped the team scoring with 99.

“I hate it for Daphney, to miss regional as senior,” Johnston said. “I know she wanted to play and we wanted her there. A shout out to Nora. She found out Friday she would be subbing in, and she stepped right up to the plate. No hesitation at all.

“The course played longer than we were used to seeing during the season, which threw us off a little. And there were some nerves starting out that you could see. It’s a lot if you’re not careful. They settled in, but we just could never get it going 100 percent.”

North’s Faith Johnson was the medalist with a 69. The top five individuals who were not members of advancing teams also qualified for the state finals.

The Stars will use the experience and reality of the regional to motivate them during the off-season.

“They’ll be coming back,” Johnston said. “The scores today lit a fire under them and they want to do better next year. As a first-year coach, I’m thrilled with how they played. We’re very young, we were pretty inexperienced. They all stepped up. We had a lot of shifting in the lineup, we have that deep of a roster.”