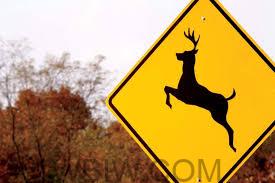 LAWRENCE CO. – The risk of hitting deer on rural roads and highways is rising, especially around dusk and during a full moon.

“Motorists need to be alert and drive with caution,” said Lawrence County Sheriff’s Department Chief Deputy Gregg Taylor. “Each year the Lawrence County Sheriff’s Department responds to several reports of car/deer accidents. The white-tailed deer breeding season, or rut, primarily occurs in October and November and we will see an added increase in deer/vehicle collisions.”

Deer cause more than 1 million motor vehicle accidents in the U.S. each year, resulting in more than $1 billion in property damage, about 200 human deaths, and 29,000 serious injuries. Property damage insurance claims average around $2,600 per accident, and the overall average cost, including severe injuries or death, is more than $6,000.

The insurance company State Farm found that on average, U.S. drivers have a 1 in 116 chance of hitting an animal. Over the 12 months ending in June 2020, State Farm counted 1.9 million insurance claims for collisions with wildlife nationwide. Around 90% of those involved deer.

While avoiding deer can seem impossible if you’re driving in rural areas, there are certain times and places that are most hazardous, and so warrant extra caution. Transportation agencies, working with scientists, have been developing ways to predict where deer enter roads so they can post warning signs or install fencing or wildlife passages under or over the roadway. Just as important is knowing when these accidents occur.

The risk of hitting a deer varies by time of day, day of the week, the monthly lunar cycle, and seasons of the year.

These accident cycles are partly a function of driver behavior – they are highest when traffic is heavy, drivers are least alert and driving conditions are poorest for spotting animals.

“Sometimes deer-vehicle accidents involve multiple vehicles, as startled drivers swerve to miss a deer and collide with a vehicle in another lane, or they slam on the breaks and are rear-ended by the vehicle behind,” added Chief Deputy Taylor. “Remember that this time of year deer movement will increase especially in the early morning and late evening hours. Always be attentive when driving, but especially in areas know for deer movement.”

These accidents occur most frequently at dusk and dawn when deer are most active and drivers’ ability to spot them is poorest. Only about 20% of accidents occur during daylight hours. Deer-vehicle accidents are eight times more frequent per hour of dusk than daylight, and four times more frequent at dusk than after nightfall, according to a study by Tom Langen, Professor of Biology, at Clarkson University.

During the week, accidents occur most frequently on days that have the most drivers on the road at dawn or dusk, so they are associated with work commuter driving patterns and social factors such as Friday “date night” traffic.

Most deer-vehicle accidents occur during the full moon, and at the time of night that the moon is brightest. Deer move greater distances from cover and are more likely to enter roadways when there is more illumination at night.

It’s important to remember that deer-vehicle accidents can occur at any time of day or night, on any day of the year – and that deer can show up in urban areas as well as rural ones.