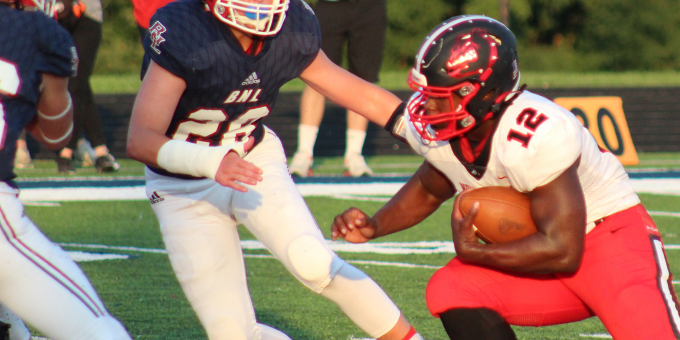 BEDFORD – Olympus had fallen. And the football world shook. Columbus East’s historic Hoosier Hills Conference winning streak, almost impregnable after 96 games, came crashing down. The team that wielded the sword, that slung the stone to slay Goliath? Seymour was the unexpected hero for the rest of the league. The reign of terror was finally over.

The Owls celebrated that stunning triumph, then got brought back down to reality by the dragon that continues to prowl and torment the countryside: virus protocol. Contact tracing forced Seymour to the sideline last week, erasing the encore performance against Floyd Central.

Now, for the first time since the shocking 28-24 upset of the Olympians, Seymour (1-2, 1-1 in the league) will return to action, hosting Bedford North Lawrence as the Stars make their HHC road debut on Friday night.

BNL (1-3, 1-1) also fell stiffly back to earth during last week’s loss to New Albany. The Stars lost that clash for the lead in the conference, and learned how fragile reality can be. Turnovers and penalties can stunt growth, and BNL took a step backward in that regard during the 27-16 setback. The margin for error doesn’t allow for major issues. The Stars will regroup for their next battle.

“We didn’t play our best game,” BNL coach Derrick Barker said. “The biggest thing is focusing on getting back to ourselves, doing things the way we’re supposed to do them. Maybe we were a little too focused on New Albany, on some of their guys, maybe the magnitude of the game. We need to refocus on doing our job, playing the best we can. You want to respect the opponent but not get too caught up in focusing on them. All of a sudden we’re making mistakes and shootings ourselves in the foot.

“Last year, we weren’t bigger, faster or stronger than anyone, so we had to play almost a perfect game. This year, we’re a little closer to where we want to be, but still by no means can we lose the turnover battle, lose the penalty battle, and still except to win very many games.”

Seymour, even though one week removed, is coming off its best, rallying in the fourth quarter, recovering a fumble with 2:16 remaining and scoring the game winner (Dylan Fields on a end around from 9 yards out, diving to the pylon) with 26 seconds left to conquer East. It was the stuff of storybook and legend.

“The win was huge for our program and our community,” Seymour coach Tyson Moore said. “It also showed our team what they are capable of doing. We went from not having many people have real expectations for us, to everyone having the highest expectations.

“It didn’t help (having the week off) because our adrenaline was running high and our kids were hungry to get back at it. Unfortunately that was something out of our control. The silver lining is that is gave us an extra week of recovery for some of our guys who were banged up.”

Add to that the victory was engineered by sophomore quarterback Bret Perry, thrust into the limelight when starter Will Gray (who threw for 312 yards and 4 touchdowns in a loss to Jeffersonville the previous week) was sidelined with an injury. Perry, adept at getting out of the pocket to create, still has weapons in Fields (who had an 85-yard kickoff return for a score against East) and receiver Jack Pennington.

“We have to find our balance,” Moore said. “We have to get better in the run game and establish ourselves on the ground. A team that is one-dimensional won’t have much success.”

“They’re a scrappy team,” Barker said. “Perry might not have the experience, but he’s a really good athlete. He made some plays with his arm, as well with his feet. They impressed me with how hard they played against East, the confidence they had and the belief they showed. Not playing since then gave them a good opportunity to reset and refocus. They’ll have full attention on us. I expect to get their best game.”

BNL’s best will center on two key areas: running the ball and stopping the run. Of course, that’s the bread-and-butter formula for success in any game. The Stars, unable to generate the explosive plays of previous weeks, were limited to 103 rushing yards against New Albany (and gave up 251), while Seymour surrendered 287 rushing yards and totaled only 4 against the Red Devils. BNL must win the line of scrimmage.

“We have to control the ball, finish drives,” Barker said. “We have to be able to answer, make some adjustments and not make mental mistakes.”

Last season, the Owls won those battles, and thus the contest. Seymour totaled 254 yards rushing, and allowed the Stars to throw for only 16 yards on two completions, while running over BNL 26-7. Perry had a 24-yard score that night while quarterback Cory Ruble accounted for 185 total yards and a 52-yard touchdown run late in the third quarter. BNL was also guilty of 9 penalties.

This time, Seymour will have to contend with sophomore quarterback Memphis Louden (688 passing yards and 5 TDs, with 5 interceptions), top receivers Ryker Hughes (9 catches fo 239 yards) and Dylan Nikirk (9 for 171), and main running back Zane Anderson (188 yards and 4 TDs). Senior linebacker Ryan Perry leads the defense with 45 total tackles (3 for loss) while Jesse Brock has 3 interceptions.

“BNL is a good football team,” Moore said. “In my three years playing against them, I have seen them progressively get better and more disciplined. They have a strong defense and do some things to throw offenses off, and they have playmakers with a sound scheme. This is a team that can beat anyone. We definitely do not take them lightly.”

Another vital area – a fast start, especially on the road. BNL cannot afford to squander scoring chances, as it did with a first-and-goal that was wasted early against New Albany. Those opportunities to establish momentum are crucial.

“The game never comes down to one play, but it can certainly come down to three or four plays,” Barker said. “When you have the opportunity to grab the momentum, especially early, you have to be able to take it and run with it.”

Last meeting: Last year at BNL, the Owls ran for 254 yards while running over the Stars 26-7. Seymour quarterback Cory Ruble threw for 98 yards and ran for 87. BNL was limited to 16 yards passing and was guilty of 9 penalties.