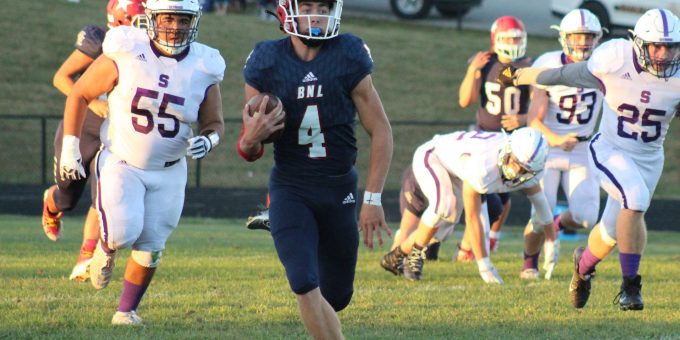 BEDFORD – Cody Ruble was worth his weight in rubles. His offensive line was pure gold. Russian conspiracy? No, Seymour cashed in on a strong currency and Bedford North Lawrence paid the cost.

Ruble broke three tackles for the back-breaking touchdown, and the Owls pounded the football like a jackhammer on brittle concrete, bashing their way to a 26-7 victory over the Stars and casting a pall over BNL’s early Senior Night festivities.

Ruble ran for a team-high 87 yards and completed 13 of 19 short-range passes for 98 yards as Seymour (3-2, 3-1 in the Hoosier Hills Conference) ended BNL’s two-game winning streak. The Stars (2-3, 2-1) suffered their first league loss with a tough gauntlet still ahead.

BNL’s option offense, after the one touchdown to open the third quarter and cut the Seymour lead to 13-7, produced only one first down the rest of the way. No comeback was forthcoming. Seymour made sure with frustrating ball control and running-game dominance.

“They believed they were better in the middle than we were, and tonight they were,” BNL coach Steve Weber said. “We were out-physicaled. We got beat up front non-stop. We came out with a little fire and thought we would get some things established, but it kind of fizzled.”

Proof was in the numbers. Seymour ran at will – not for huge chunks, but for constant forward movement. The Owls totaled 254 rushing yards on 47 attempts. The biggest play was Ruble’s 52-yard escape and dash for the dagger touchdown late in the third.

“Talk about responding,” Seymour first-year coach Tyson Moore said. “Defensively we played a great game, other than the one touchdown. I told our offense that we can respond in a big way, and we were able to do that.

“It feels like we ran about 200 plays. Our offensive line grinded, we were able to run the ball. Our line was player of the game. We went for a pay day, and we got paid.”

Seymour started collecting early, driving 65 plays in 12 plays on the first possession. Ruble hit wideout Drew Vehslage for 11 yards on fourth down for the touchdown in the left corner of the end zone.

When BNL’s first drive ended with a fumble at midfield, Seymour pounced again. Freshman receiver Bret Perry converted a perfect double reverse, taking off as BNL’s defense pursued Ryan Elmore before he unloaded the ball, from 24 yards for a 13-0 lead.

BNL settled from there but couldn’t generate a counter attack as penalties wiped out big plays. The Stars also came up with a goal-line stand, stopping Ruble on fourth down from the 1.

The Stars started the second half with Colton Staggs’ 46-yard kickoff return to the Seymour 34, and Zane Anderson did a lot of the work from there with five straight carries. Brye Lewis scored from the 3, creating the 13-7 goal and some hope of a victory after the lackluster first half.

Ruble dashed that with his dash. On 3rd and 7 from midfield, he stepped through two tackles at the line of scrimmage, shook off another in the secondary and won the footrace.

“We had guys in position,” Weber said. “We couldn’t get him down. We didn’t tackle very well.”

Chaandler Drummond capped the scoring with a 12-yard TD run with 3:23 left.

Ruble and Drummond both finished with 87 yards rushing. Vehslage caught 6 passes for 65 yards.

BNL’s attack was watered down and snuffed. Lewis ran for 86 yards, but the lack of a passing attack (2 of 10 for only 16 yards) made Seymour’s job much easier. The Stars totaled only 7 first downs.

”We didn’t get impatient with things and didn’t do too much,” Moore said. “We did our job.”

The Stars were also guilty of 9 penalties.

“We dug some holes,” Weber said. “We’re not good enough to dig ourselves out of it. It’s hard for the kids to handle.”

BNL also suffered a blow after the contest. Luke Allender, one of the 9 seniors honored in pre-game ceremonies, went down after the postgame team huddle and had trouble breathing. He was transported by ambulance to a local hospital.

The Stars will visit Terre Haute South next week.