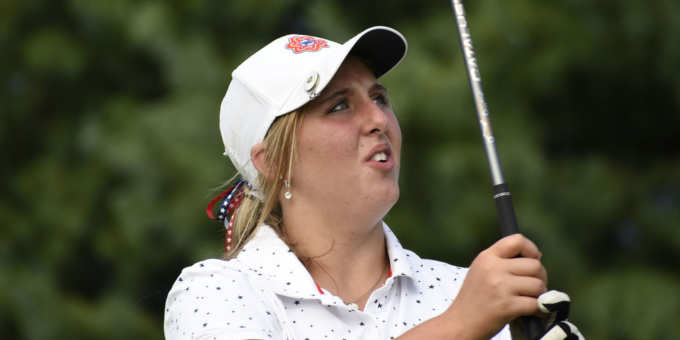 BEDFORD – The power of positive thinking carried Kenley Craig through another positive round at Otis Park.

With her putter as her friend, Craig carded a 5-over 40 on the back nine on Monday afternoon, powering Bedford North Lawrence to a 180-226 win over Edgewood. Samantha Biel added a 43 for the Stars, who continue to shine with two members of the expected five-player lineup still out of action.

“My putting was really good,” Craig said. “Ones I normally miss, I just blocked every negative thought, and it worked out.

“With two starters out, we have a big lineup, and that’s great. But I knew I needed to play a little bit better, as best as I could. I’ve been practicing a lot more, trying my best, and it’s coming together.”

“I’m proud of them,” BNL coach Kori Johnston said. “They’re really stepping up. They’ve done their part, and I’m excited to see these scores continue to go lower and lower. I know they’ve been putting in a lot of work, and I’m excited that they’re excited about lower scores.”

“Everyone likes to work on range, on flat lies, but we’ve worked on bunker shots, punch shots, the more realistic shots we’ll run into, learning how to recover,” Johnston said. “I don’t want to get the cart before the horse, but I’m getting excited for the conference and sectional time. I think we’ll be firing on all cylinders.”

The Stars will visit Martinsville on Thursday.