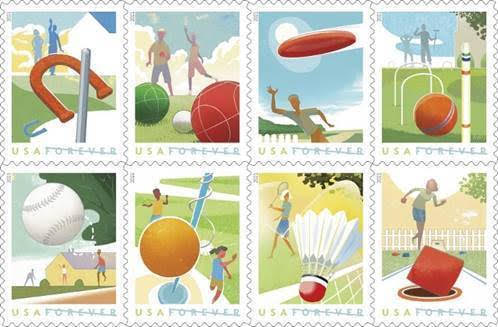 INDIANA — The U.S. Postal Service celebrated the outdoor recreational games that Americans play with vibrant new stamps during a dedication ceremony at the opening of the Great American Stamp Show 2021, held recently at the Donald E. Stephens Convention Center in Rosemont, IL.

News of the Backyard Games Forever stamps is being shared with the hashtag #backyardgamesstamps.

With this pane of 16 Forever stamps, the U.S. Postal Service celebrates the variety of games Americans play for outdoor recreation.

As temperatures warm up, Americans head outside to relax and enjoy the sunshine. With a touch of strategy, a bit of luck and a healthy dose of friendly competition, backyard games provide almost endless amusement. At the beach, in a public park, or in your own backyard, these games are a great way for children and adults to have fun while enjoying the company of friends and family.

Named for a royal country estate in England where the sport was first played, badminton is a popular form of backyard recreation. Much like tennis, it can be played with either two or four players. Each player uses a lightweight racket to hit a shuttlecock (also known as a birdie or bird) over a 5-foot net to the opposing side. The game continues as players volley the shuttlecock back and forth, not letting it hit the ground.

Originating in Italy, bocce is now widely played across the United States. Referred to variously as bocce ball, bocci, or boccie, this sport takes a bit of finesse to perfect. Two players, or multiple players divided into two teams, begin a game by first throwing a small ball known as the jack from one end of the playing area to the other. Players then take turns throwing their larger balls — typically made of clay, wood, or plastic — toward the jack, attempting to land their balls as close to the jack as possible. Arousing game of bocce can last just a few rounds or for hours, depending on the skill of the players and their own variations on scoring.

Cornhole (also known as sacks, beanbag toss, or sack toss) has become increasingly popular in recent years, likely because of its simple rules and ease of play. Players take turns tossing soft, square bags — filled with dried corn, plastic pellets or beans — onto wooden boards that are raised slightly off the ground on one end. The goal is to get the bags through a small hole on one side of the board, scoring based on how closely the bags get to the hole. A fun, recreational game, cornhole can be played with teams or singles.

Croquet is a popular garden party game. Nine wickets, or hoops, and two stakes pressed into the ground in a double diamond formation create the gameplay area. Many variations on the game exist, but common play consists of two or four people, each with their own wooden mallet, and four balls. Players hit the balls with their mallets, advancing them through the course — created by the wickets and stakes — in the correct order.

Tossing a flying disc can be as simple as playing catch or as involved as a spirited team game called “ultimate.” With the flick of a wrist, a hard plastic, the aerodynamic disc can sail through the air, flying straight or veering at an angle, depending on the thrower’s aim and release. Disc golf is also a popular game using flying discs and has rules like golf — without the ball and clubs, adding a new dimension to the art of throwing a disc just right.

The game of horseshoes is traditionally played with heavy metal horseshoes; however, lighter plastic ones have also become common. Two stakes in the ground mark the game area. Players pitch their horseshoes at one of the stakes with the goal of getting the shoe to encircle the stake — what’s known as a ringer. Scoring is based on how closely the shoes of a particular player land to the stake. Much like cornhole, practice with the swing and release of the shoe, getting comfortable with the weight and the distance, makes landing the perfect shot much easier.

Often played in public parks and on playgrounds, tetherball is a fun, fast-paced game enjoyed by children and adults. Tetherball consists of a semi-soft ball, much like a volleyball, fastened to a rope that is attached to the top of a pole. Two players take turns hitting the ball, attempting to wrap the rope completely around the pole. The ball can move either clockwise or counterclockwise, keeping players on their toes as they attempt to win.

Many versions of pickup games of baseball are played in the United States. One common variation consists of using a lightweight plastic ball and bat, which makes throwing and hitting the ball a bit easier. The rules are like those of baseball or softball, but an official diamond isn’t necessary. If players know where the bases are, all that’s needed is an open area and an excited team.

The story behind the Backyard Games Forever stamps is also featured on the U.S. Postal Service Facebook and Twitter pages ,posting at 1 p.m. CT on Aug. 12, 2021.

A pictorial postmark of the designated first-day-of-issue city, Rosemont, IL, is available at usps.com/shopstamps.

Customers may purchase stamps and other philatelic products through the Postal Store at usps.com/shopstamps, by calling 844-737-7826, by mail through USA Philatelic, or at Post Office locations nationwide.