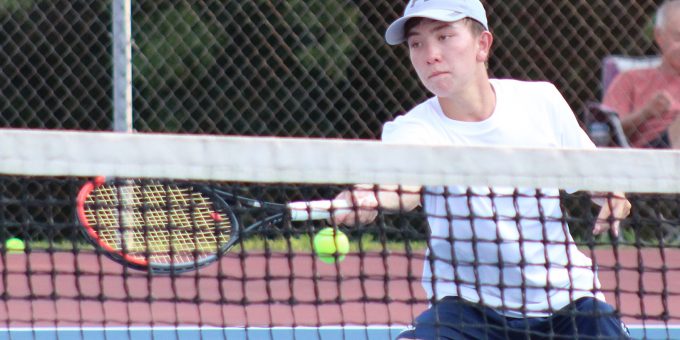 BEDFORD – After 10 years off the court, Chris Kurtz has picked up a tennis racket once again. And it feels good in his hands.

Kurtz, the former Bedford North Lawrence girls coach from 2003-2011, has taken over the boys program following the departure of Donnie Thomas (now coaching at Brownstown). He has inherited a team with five returning veterans who helped the Stars post a solid 14-9 record and reach the sectional final last season.

His time with the BNL girls came to an end when family responsibilities superseded his coaching career. After a decade away, he has rediscovered his passion for the game.

“It’s great getting back into tennis,” Kurtz said. “I enjoyed all of those years, and those teams, but I was younger then and building a family, it was time to focus on that. Fast forward 10 years, the opportunity to get back out there came up, and here we go. It feels new again. I’ve rediscovered how much I truly love the game. And not only do I love the sport, I love investing in youth, and helping them discover things about life.”

What he has discovered is talent. With three seniors at the top of the lineup, the Stars have the potential to do some damage and contend for titles. Steven Graham will start in the No.1 singles spot, and Cameron Gratzer will be the focal point of the top doubles tandem. Caleb Jones will be in the seven-player rotation in some capacity.

“We have a solid group of returning players,” Kurtz said.

Junior singles player Graham Turner will lock down the No.2 singles slot, and junior Nate Pemberton (who teamed with Jones in doubles a year ago) will fit into the mix. Add sophomore Jayden Kemp into another spot, and that’s six of the top seven accounted for.

”We can use Nate in either doubles or singles,” Kurtz said. “Like Caleb, he has certain strengths in both, we’ll have to find the right fit. Beyond that, it’s very close as to who will fill the final varsity spot, and it may change from match to match. I’m looking for certain things in practice that will help us win. The guys all know what those things are, we’ll see who steps up and forces my hand.”

Kurtz’s goals for his first season back are pointed toward individual growth rather than wins or losses.

“From every player I expect the same thing, and I actually printed out my seven expectations and gave them a copy for quick review,” he said. “Quite simply, they address attitude and effort. Players must remain positive, and give 100 percent in all practice and match situations. These guys are stepping up.

”The goals are to develop a culture of intensity, noticeably outwork and out-hustle every opponent, grow tough mentally. These things are within our control, so it’s decide and do. Winning will follow.“

Gratzer appreciates the refocused direction of the program.

“With the new coaches, we have great opportunities,” he said. “All of us are improving. We’re getting more specifics with hitting and strategy, which is helping. I’m getting a lot more consistent.”

The Stars will start the season at Barr-Reeve on Aug. 16.