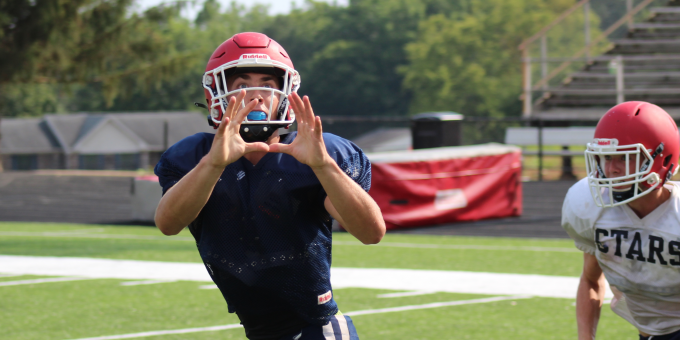 BEDFORD – Zane Anderson’s bloody nose, on the first day of full-contact, battle-gear workouts on Thursday afternoon, was a true badge of honor. Football is, after all, a contact sport, and Anderson was among the seniors who requested more physical practices in the preseason sessions.

File that under the category of being careful what is wished for.

First-year Bedford North Lawrence head coach Derrick Barker does not come across, nor look the part, of the blood-and-guts, old-school coaches in the mold of Bear Bryant, Bill Parcells or Vince Lombardi. But he’s preaching the old-time sermons. Be physical. Play like you practice, and that means more hitting for a team that struggled with that aspect last season.

“We want to be physical,” Barker said. “Football is a physical game. At the end of the day, it comes down to blocking, defeating blocks and tackling. You can’t get that with walk-throughs going half-speed. We have to hit and get used to the physicality. Practices should be harder than the game. If we can go that hard for that long in practice, it should transfer over to the game.

“It was a little more realistic today. The last couple of days, they had been asking for it. They were excited. The physicality of it kind of caught them by surprise, they got tired a little quicker. But that’s to be expected. They were wanting to hit more, which is good to have to rein them back a little bit. That’s a problem we usually don’t have.”

Contact separates the pretenders and posers from the tough and tenacious. The Stars intend to identify the latter group.

“These drills define players,” Anderson said. “This defines who wants to be here and who doesn’t, who’s a dog and who’s not. We’ve talked about how we need to hit more. We’ve all been looking forward to it.

“I grew up on hitting, the bull in the ring. Hitting in practice shows who needs to work on it. It means we’re getting there. It shows everyone we’re getting stronger, our intensity. It was really good.”

“There will be guys who look good in shirts and shorts, but when the full gear gets on they kind of separate and fall off,” Barker said. “You see who loves it, who the aggressive kids are, who hides in the back when those drills come up.”

The purpose of the popping of pads is not just bloody noses or bruised bodies. BNL surrendered 302 points past season (33.6 per game) and played three times with running clocks in the second half of blowout losses. Part of that could be traced to youth and a lack of weight-room muscle. Age and attention to barbells can fix some of those issues. The Stars can tackle the rest of it.

“Tackling was a huge problem for us last year,” Barker said. “We were young and just not strong enough. But we have to understand how to do it properly. It’s something we will take more seriously and put more effort into this year. We struggled last year.”

BNL will get the chance to show its improvement in that area during next week’s IHSAA scrimmage with Mitchell, the final dress rehearsal before the season opener at Martinsville on Aug, 20. Barker has opened Friday’s practice session (4-6 p.m.) to the public and has requested fans in the stands for a game-like atmosphere.