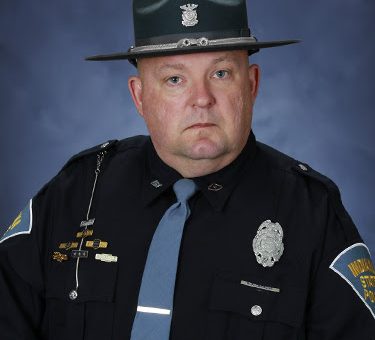 Sergeant LaRoche is a native of Huntingburg, Indiana, and a 1991 graduate of Southridge High School. After high school, LaRoche served in the United States Army from 1991 to 1993. LaRoche also served in the Indiana National Guard until 1999. LaRoche attended Vincennes University and graduated in 1996. Before joining the Indiana State Police, LaRoche worked as a reserve officer for Huntingburg Police Department and as a jailer for the Dubois County Sheriffs Department. He was selected to attend the 58th Indiana State Police Recruit Academy and was sworn in as a Trooper in December 1999. LaRoche’s first duty assignment was to the Connorsville District until he transferred to the Jasper District in 2001.

Sergeant LaRoche has served as a field training officer and K9 handler. He was assigned to the drug enforcement section for eight years, from 2008-2017, as an interdiction officer. He has two meritorious service awards and a life-saving award.

Sergeant LaRoche will mentor and supervise a squad of troopers assigned to the Jasper Post in his new position.

Sergeant LaRoche is a licensed IHSAA football and baseball official.

Sergeant LaRoche lives in Huntingburg with his wife Cathy and daughters Kelby and Keegan.