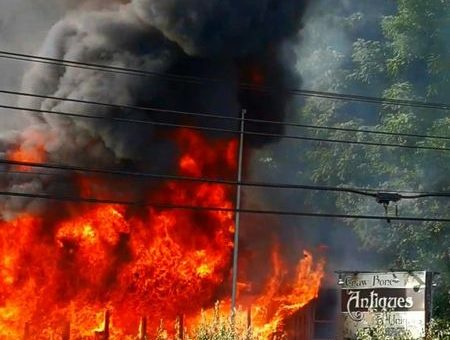 BROWN CO. – The Brown County Volunteer Fire Department responded to a structure fire on Thursday, July 8, 2021, at 6:47 PM located at 5428 SR 46. The location is known as the Gypsy Moon Flea Market.

Firefighters from Brown and Bartholomew Counties responded to the fire.

Several 911 callers reported seeing smoke and flames exiting the building. The first fire apparatus arrived on the scene approximately 13 minutes after the initial dispatch reported flames showing on all sides of the building.

The occupant of the building was not present at the time of the fire. All units were clear of the scene by 10:47 PM. The cause of the fire was undetermined after investigation. The American Red Cross was contacted to assist the occupant with the loss of his residence and personal belongings. For more information please visit https://www.browncountyvfd.org/.