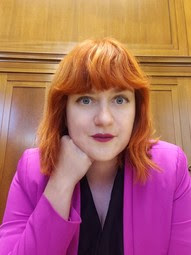 INDIANAPOLIS – The Indiana State Library is pleased to announce Victoria Duncan as the new supervisor of its Rare Books and Manuscripts Division.

Duncan comes to the Indiana State Library after nearly six years at the Indianapolis Public Library where she most recently served as the digital projects manager. She holds a master of library science degree from Indiana University, with a specialization in rare books and manuscripts. In addition to her experience with digital collections, she has previously worked for the Indiana Historical Society, the Lilly Library at Indiana University in Bloomington and The Fales Library and Special Collections at NYU. She has an interest in the antiquarian book trade and had stints as a rare books and manuscripts cataloger in both New York City and Los Angeles.

Duncan lives on the east side of Indianapolis with her husband and 3-year-old. She is an avid traveler and has circled the country several times by car. She also loves horror and the history of the book and is member of the Aubrey Beardsley Society.

“I’m genuinely thrilled to be here and encourage questions and introductions from one and all!,” Duncan said.