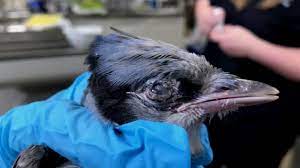 INDIANA – The state now confirms the number of counties with dead songbirds has more than doubled since Friday.

The disease is also impacting poultry farmers. The Indiana State Board of Animal Health sent out a warning Monday afternoon to tens of thousands of poultry farmers urging them to take precautions and to make sure they are socially distancing wild birds from their flocks.

DNR says it’s received nearly 1,195 reports to the portal, with about 200 of those believed to be related to the sick and dying songbirds. That’s roughly double the number of reports they had last week.

Officials are asking Hoosiers across the state to take down the feeders while the state investigates why several species of songbirds are dying.

Investigators say the birds have shown signs of a neurological illness. Symptoms include swollen eyes with a crusty discharge, breathing trouble, blood from the mouth, and weakness. Death often seems to come pretty quickly to the affected bird. It seems to be a virus and scientists are scrambling to find out what it is and how to stop it.

Officials are asking all Hoosiers across the state to remove feeders from their yards, including hummingbird feeders.