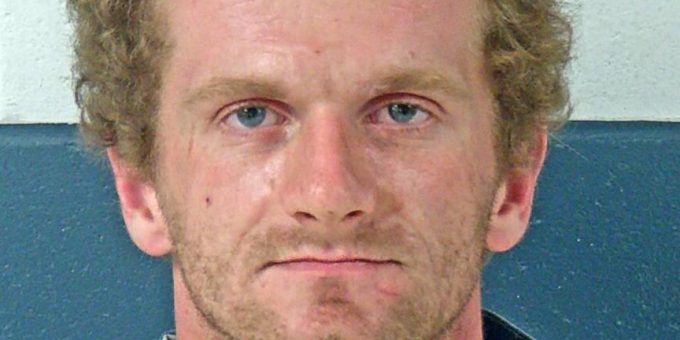 MITCHELL – A Mitchell man was arrested after a warrant was issued for his arrest.

According to a probable cause affidavit on Tuesday, January 26, 2021, dispatch received a call at 5:38 a.m. from White River Co-Op on State Road 37 saying a male in a maroon Chevrolet truck was stealing items from a semitrailer and had just fled the business at a high rate of speed. The caller was following the male, but eventually lost sight of him.

Deputies searched the area in an attempt to locate the truck which had part of the back bumper missing. A Mitchell Police officer then informed deputies Dallas Knight owned a truck matching the description of the truck with a partial missing bumper.

Other deputies went to the scene to speak to the caller. He reported he was at work and heard a noise and located two males beside a semi with an attached trailer. The trailer door was open. The two males told the caller they were part of the maintenance crew, apparently the overnight  shift. The caller knew the Co-Op didn’t have a  maintenance crew, and he believed the two males were  stealing from the semi.

The one male got into the truck and took off while the other male fled on foot.

Police nor the Co-Op employees could locate the male who fled on foot.

Police say the males were attempting to remove metal items from the semi. They left their tools at the scene. Police believe the tools, a Titan brand ratchet with an attached socket, were dropped as the males fled the scene. Between the semi and trailer officers found more sockets lying on the ground.

Police found the muffler system disconnected from the semi.

Police also found a camouflage hat lying on the semi step and another socket and screwdriver inside it.

Police say the men were attempting to remove the mirror from the semi as it appeared to also have been tampered with.

The manager of the business told police they had another recent theft of mirrors from Co-Op vehicles. Those mirrors cost approximately $3,500. The manager had told police he had not reported the theft of the mirrors.

Under the hood of the semi, police found wires had been disconnected from a “turbo” and it appeared the men were attempting to remove it.

Police also found damage to a propane truck on the lot.  Two diesel exhaust fluid canisters had been removed from the propane truck and were stolen.The employee told police the canisters were $4,000 each and could possibly be scrapped for around $1,500 each.

Police found the canisters under the truck on the ground.

The vehicle was towed to Evansville to be repaired. The tow bill was $1,000 and repairs and inspection cost approximately $10,000 dollars.

Police said they would begin making extra patrols at the Co-Op.

DNA samples were taken from the tools and hat.

Police then found a Facebook post with Knight wearing a hat resembling the one found at the scene.

The employee also told police he got a good look at the suspect who drove from the scene. However the employee did not pick Knight out of the lineup.

On Wednesday, January 27, 2021, at approximately  5:44 a.m. deputies were informed by Bedford Police to be on the lookout for a stolen 1996 maroon GMC Sierra  pickup truck. The truck was reported stolen by Dallas Knight and was being driven by Clint Ferguson. The reported stolen vehicle was last seen in the area of Meridian Road in Mitchell. Knight said the vehicle had been stolen sometime after midnight on January 26th.

Later in the day, a female called reporting they had located an abandoned truck at Talbott Cemetery on Bono Road. It was Knight’s pickup. The truck had been found around 2 p.m. on Tuesday, January 26. The keys were found in the ignition.

Tools were also found in the truck matching the ones found at the crime scene at the Co-Op.

Knight then called Bedford Police and requested they not process his truck and his truck had not been stolen; that it was just a misunderstanding between he and Ferguson.

Knight was told he needed to come and retrieve his truck.

On Tuesday, February 2, 2021 police spoke to Ferguson who was incarcerated at the jail on unrelated charges.

Ferguson said he knew Knight but had not seen him since last year. He was then told Knight had accused him of stealing his truck, which upset Ferguson. He said he had not stolen the truck or been a part of the theft at the Co-Op.

Police then attempted to call Knight several times but he would not answer the phone.

On Sunday, February 7, 2021, at approximately  8:05 a.m. police spoke to Knight who was incarcerated in the jail on unrelated charges.

Knight was asked about the theft from the Co-Op. Knight claimed his pickup truck was stolen and he didn’t have anything to do with it. He then told police he owed people money (Ferguson and Tristan Clemens) and that may be why they stole his truck.

Knight claimed when the theft was took place he  was at his father’s home on Rariden Hill. According to Knight, family members could corroborate his whereabouts.

Knight was then told police were waiting on DNA results on the items found at the crime scene. He said if his DNA came back it was because someone had stolen his truck and left his items at the scene. He stated he was not  at the Co-Op when the theft was committed.

On Tuesday, June 8, 2021, at approximately 6 a.m. police received the DNA results.  “The DNA profile from the combined swabs was  interpreted as a mixture of two unknown individuals,  including at least one male. Unknown Male #1 cannot be  excluded as a contributor to the mixture.”

The swabs of the hat yielded, “The combined swabs demonstrated an  insufficient quantity of DNA for further analysis.”

All the information was forwarded to the Lawrence County Prosecutor’s Office and a warrant was issued for Knight’s arrest.