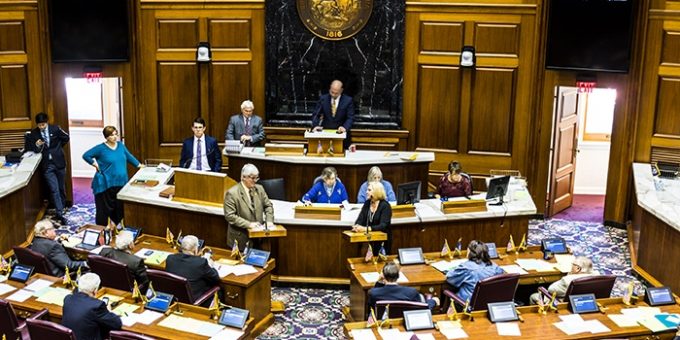 INDIANA — The Indiana Chamber of Commerce has released its annual report scoring state legislators on how they voted on key business legislation in the recent General Assembly. The overall marks are higher than last year – ranging from 42 percent to 97 percent.

“The Legislative Vote Analysis is our annual method to quantify for citizens and employers how their lawmakers voted on issues vital to the state’s economy,” says Indiana Chamber President and CEO Kevin Brinegar. “For many legislators, the scores are higher this year. In fact, the average scores for House Republicans, House Democrats, and Senate Republicans all improved.”

Bills included for examination in the Legislative Vote Analysis can be traced back to the Indiana Chamber’s economic development plan, Indiana Vision 2025 (www.indianachamber.com/2025). The plan contains 37 goals in the four driver areas of Outstanding Talent, Attractive Business Climate, Superior Infrastructure, and Dynamic and Creative Culture.

Among the legislation included in the report that became law: civil immunity for businesses related to COVID-19; broadband expansion in underserved areas and populations; and further business personal property tax exemption for small businesses.

“The 2021 legislative session was strong for business recovery and several long-sought policies became reality,” Brinegar adds. “That’s remarkable in the face of the pandemic and the necessary modifications to procedure. Yet, there still were missed opportunities that could have made this General Assembly session even greater. Such as not increasing the state’s low cigarette tax, passing a FAFSA completion requirement for high school seniors or establishing a state work share program.”

In total, the success or failure of 47 key pro-economy, pro-jobs policies – introduced in bills or amendments – was used to determine lawmakers’ scores, which are available on the Indiana Chamber’s website at www.indianachamber.com/lva.

Legislators who scored 70 percent or greater for the most recent four-year voting period are eligible for endorsement consideration by the Indiana Chamber’s political action committee, Indiana Business for Responsive Government.

Lawmakers are notified of the Indiana Chamber’s position and reasoning on the bills in this report through various communications during the legislative session – and prior to key votes being taken. Floor votes for which there is a public record are used in the Legislative Vote Analysis.

The Legislative Vote Analysis is distributed electronically to all legislators and Indiana Chamber board members and made available online for all businesspersons, community leaders, and citizens. This marks the 37th year the Indiana Chamber has measured state legislators’ voting performance on bills that reflect the organization’s public policy positions.