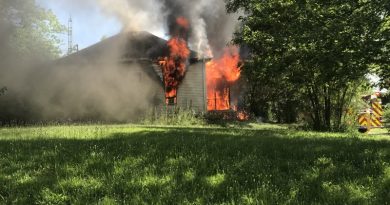 Firefighters were called to a home in the 200 block of South Hinman Street at about 4:42 p.m. The fire had started in the bedroom area. When firefighters arrived they found flames shooting out of the home.

Two men had escaped the fire and told firefighters a woman was still trapped inside in a mechanical lift in a back bedroom.

Despite heavy smoke reducing visibility to blackout conditions, firefighters battled the smoke and flames and found the woman and rescued her from the burning home.

The woman was conscious, suffering from smoke inhalation and was transported by ambulance to Columbus Regional Hospital for treatment.

Additional firefighters arrived on the scene and had the flames under control in about 15 minutes.

The fire caused extensive damage to the front of the residence and smoke damage was found throughout the home. Two of the family’s cats died in the blaze.