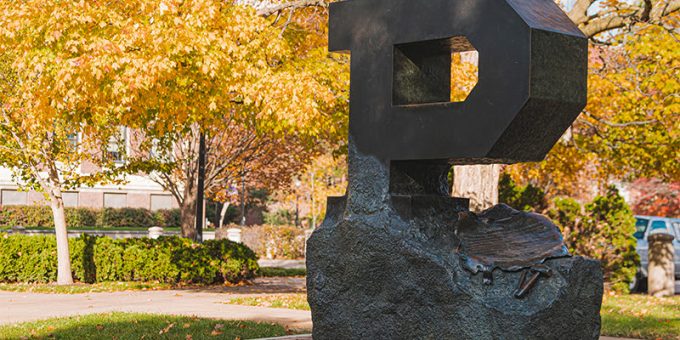 Bob and Trudy Hull gave a gift to support the Hagle Hall facility project, expected to be completed in July 2022 as the new home of Purdue Bands & Orchestras. The “All-American” Marching Band Complex will be located in the expanded space attached to the Turf Recreation Exercise Center within the Córdova Recreational Sports Center. It is near Hull Drill Field, which was named in honor of Bob and Trudy from a previous gift. Bob Hull is a 1965 Purdue graduate and was involved in Purdue Bands.

The Morgan and Kate Burke Southwest Entrance of Mackey Arena is named in honor of the former Purdue vice president and director of intercollegiate athletics and his wife – both Purdue alums (Morgan 1973 and Kate 1974) – thanks to a gift by the Schleicher family.

Burke’s tenure as athletics director from 1993 to 2016 ranks as the longest in school history, and during that time he made his name as one of the nation’s visionary leaders in intercollegiate athletics. Among the many athletics facility projects Burke oversaw was the Mackey Arena Complex. The Southwest Entrance is adjacent to the intersection of Wooden and Tower drives across from Lambert Fieldhouse. The Morgan J. Burke Boilermaker Aquatic Center was named in 2017 in honor of Burke, who also was a Boilermaker swimmer and swim team captain.

The Dave and Jacque Owens Career Development Gateway is the career development program within the student-athlete development program, and the naming reflects a gift by David and Jacqueline Owens to support the Purdue Athletics “More Than A Game” campaign. Dave is a Boilermaker football alumnus and Jacque also is a Purdue graduate, as is one of their children, Bailey.

The goal of the student-athlete development team is to empower student-athletes through education, entrusting them with the resources needed to succeed and providing entrepreneurship opportunities. At the heart of the student-athlete development team is the belief that every Boilermaker should have the opportunities to excel, which is why all initiatives can be traced to at least one of those key concepts: entrust, educate and entrepreneurship. The program resides within the Brees Academic Performance Center.