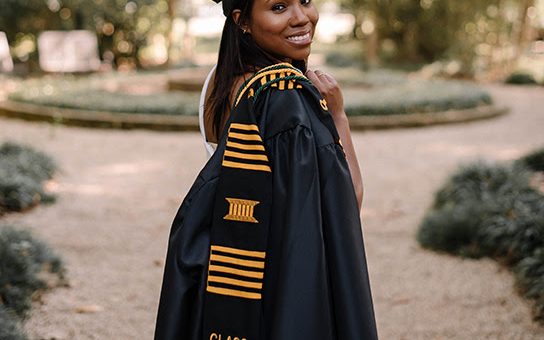 WEST LAFAYETTE – Charged by the Board of Trustees in the fall of 2020, Purdue University continues taking steps to enhance the experience for Black Boilermakers. As part of the multimillion-dollar Equity Task Force initiative, Purdue is hiring additional recruiters to help attract Black students; is expanding existing programs such as Emerging Leaders; and thanks to more than $25 million in donations, is introducing more scholarship opportunities for underrepresented minority students.

On Friday, Purdue trustees heard an update on the actions of the Equity Task Force Core Implementation Team, established in April and led by Jay Akridge, provost and executive vice president for academic affairs and diversity, and John Gates, vice provost for diversity and inclusion.

Friday’s update coincides with the first graduating class from Purdue Polytechnic High School in Indianapolis, a school created to build new K-12 pathways that lead to Purdue, especially for Hoosier students who are underserved by traditional high schools and underrepresented in higher education. 40 PPHS graduates will attend Purdue to continue their education, laying the groundwork for many more to follow.

The charge for the 10-member ETF Implementation Team is to undertake:

* New and expanded mentoring and community-building initiatives for Black students, faculty and staff.

* Purdue’s becoming a leader in attracting and ensuring the success of Black scholars, ultimately enhancing the lives of the entire Purdue community and beyond.

“Purdue is committed to not only providing opportunity through recruitment of Black students, but also enhancing their experience while on campus and their lives after their time at Purdue,” Akridge said. “We are also going to recruit more Black faculty and staff members through a variety of hiring and remote working opportunities.”

To help attract additional students, faculty and staff, Purdue will begin the process of hiring additional recruiters through the Office of Enrollment Management and Human Resources, as well as initiate faculty cluster hires and added recruitment of graduate students via the Graduate School.

Enrollment Management has created the position of academic outreach coordinator, and two hires will be made initially. The team will join with Marketing and Communications to conduct market research, develop enrollment strategies and plan an expansion of K-12 initiatives in Indiana, among its activities.

“Our overarching goal is for Purdue to be the first-choice institution for Black Boilermakers, whether they are students, faculty or staff,” Gates said. “This is just the beginning of a larger commitment to expand Black representation, improve experiences and success of Black Boilermakers that we will be undertaking.”

Provost Fellow Barrett Caldwell will help lead an effort to identify STEM (science, technology, engineering and math) areas for possible cluster hires, such as public health. The group will determine the number and cadence of cluster hires, with an initial wave to begin in fall 2021.  Two new hires in African American studies will be made.

A review and expansion of graduate mentoring programs is underway. A part-time academic success coordinator for Purdue Polytechnic High School students also will be hired.

Purdue has worked to increase the number of scholarships and financial aid packages for underrepresented minority students and continues to support the PPHS and Emerging Leaders programs. To do that, Purdue appointed Mark Gaines as senior director of development for diversity and inclusion for the Purdue for Life Foundation.

Through May 31, Purdue has raised $26.9 million for minority scholarship and recruitment efforts, which is an increase over the $3.4 million raised in fiscal year 2020. For 2021, there have been 5,446 gifts to 212 different funds.

PPHS Schweitzer Center at Englewood will graduate its first class on Friday (June 11), and 40 of its students will come to Purdue’s West Lafayette campus in the fall. The Emerging Leaders program, in collaboration with the College of Science, enrolled 88 students from various backgrounds to address gender and underrepresented minority gaps in STEM-related fields this past academic year, and 140 new Emerging Leader scholars are expected to join in the fall.

Purdue also received gifts from Valerie Berger McKinney for female students enrolled in the Integrated Business and Engineering program and from Joann Troutner for several diversity initiatives, and an anonymous $1 million gift to establish scholarships for Black students in honor of the first Black graduate from the College of Engineering – David Robert Lewis – in 1894.

Trustees also approved new names for Griffin Hall North and Griffin Hall South. The residence halls will be renamed in honor and memory of Frieda Parker Jefferson and Winifred Parker White. The Parker sisters were Purdue students in 1946 who were denied access to live in the residence hall system. The family appealed the decision, and eventually Indiana Gov. Ralph Gates directed Purdue to integrate its student housing. They became the first Black students to live on campus. Both went on to graduate from Purdue in 1950. The residence hall names will be Frieda Parker Hall (Parker North) and Winifred Parker Hall (Parker South).

Purdue’s Board of Trustees established the Equity Task Force in fall 2020, with trustee Don Thompson serving as chair. Approximately 150 members of the Purdue community – faculty, staff, students and alumni – formed into working groups of 10-12 each and held meetings and listening sessions in the ensuing months.

The creation of a campuswide implementation team was included as one of Purdue’s Next Moves initiatives under the Equity Task Force pillar at the April 9 trustees meeting, with financial support of $75 million over the next five years. The group represents various parts of the university. The Equity Task Force Implementation Team, representing various parts of the university, consists of the following: