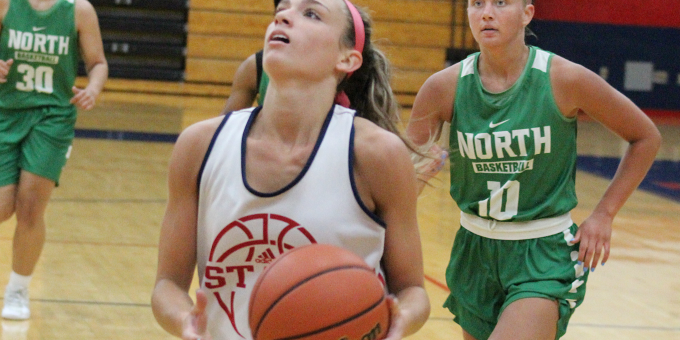 BEDFORD – The grind for greatness does not include much time off. Can’t afford it. As legend Larry Bird once admitted “My coach told me, ‘Larry, no matter how much you work at it, there’s always someone out there who’s working just a little harder.’ And that drove me.”

That’s why, on a June afternoon better suited for a lazy swimming pool, Bedford North Lawrence basketball was back. The pursuit for perfection includes a lot of sweat equity. BNL, driven to win, is making the down payment on success.

The Stars have started their June workouts, and they’ll stage several scrimmages this month as they start the necessary work of restructuring the roster for the upcoming 2021-22 campaign. If that seems a long way off, think again. After losing six seniors from the 22-3 squad that won a 10th straight sectional title, there’s much to do. And someone among the other five sectional rivals is already working.

If the public debut is any indication, the pursuers better be sweating profusely.

BNL opened its summer session with a recent win at Center Grove, although that scrimmage was not open for viewing and reaction. The one, a clash with Evansville North at BNL Fieldhouse on Monday, was ajar for all, and the loyal faithful (who would probably hike the Arctic circle to watch their beloved Stars) left with mouths agape. The Stars are going to be something to see once again.

With returning stars Chloe Spreen and Karsyn Norman showcasing their offensive powers, BNL crushed the Huskies 60-28. Spreen scored 25 points, Norman totaled 20, and they will be quite the duo.

“We all had our roles last year,” said Norman, in transition to her junior year. “They’re different this year. We need to pick it up in scoring if we want to win. Our teammates will help, but a lot of it will be on our backs.”

Spreen, who will be leaving later this week to compete for a spot on the national U-16 team, is a force in the open court, in the lane, just about anywhere. Norman, quick and tenacious, drilled two 3-pointers and got loose on the business end of fast breaks.

And they won’t be the only threats. Madisyn Bailey is smooth with the ball, Carlee Kern (fresh from softball season) is a workaholic in the lane. Emma Brown will step into a guard role. And Ella Turner showed potential for power in the paint, scoring 7 points.

“I like this group,” said BNL coach Jeff Allen, who will be departing the remainder of the week to guide the Indiana All-Stars. “They have a togetherness that will translate into being able to play some pretty good basketball. They execute well. They’re universal, we don’t get into trouble where someone gets in a spot where they don’t know what they’re doing. So our execution was good for this time of year.

“The only thing that scares me about this bunch is if we can get a rebound. We talk about that all the time. We’ll have to play a lot harder and out-hustle people. Obviously we have some offensively talented kids. So we have a chance to be pretty good.”

BNL was too good for North, roaring to a 15-3 lead after the first quarter. Spreen and Norman were scoring machines as the advantage was extended to 31-11 at half, then 48-14 after three quarters. North’s lone bright spot was senior guard Jaidn Green, who made five treys and totaled 19 points. She will need some help.

The focus for the Stars this month is combining into a symmetrical, cohesive unit. Spreen and Norman are returning starters, Kern played valuable minutes in a reserve role last season, everyone else got their experience on the junior varsity level. The shift to the varsity is a huge jump.

“We have lot of girls coming up who played a lot of JV, so it’s a whole different thing now,” Norman said. “We have to start getting used to it now. Our chemistry needs to get better. We’ve played together since we were little, but it’s been a long time since we played together like this.”

Under usual circumstances, Allen would use the allotted June time for honing in practice sessions. That’s what coaches love, hours in the gym. Players want to play. And this month, Allen agrees. Time on the court, under game-type stress, is vital for BNL’s growth.

“It’s huge,” Allen said. “We’re playing more games this month than I typically would in summer season. I think we need to play more instead of practice. Playing and filling those voids from last year is important.”

That’s where Kern and Turner will be key. They’re the only current seniors on the projected roster. This will be their team.

“Carlee is a steadying factor out there, being a senior,” Allen said. “She’s such a good athlete and smart. She will provide great leadership.”

While Allen and Spreen represent the program on a higher level, BNL will continue its summer sweat on Thursday, hosting Charlestown, before facing defending 3A state champion SIlver Creek on June 14.