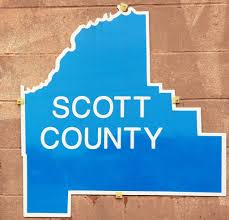 The Scott County SSP was originally established in response to the unprecedented 2015 HIV outbreak. It has successfully operated since then as a national model, reducing new cases of HIV, Hepatitis C, and endocarditis.

Two out of three Scott County commissioners voted to end the program in six months, despite support from Get Healthy Scott County, a growing coalition of concerned community members and people benefitting from the SSP, including local doctors, first responders, state and local public health officials, and pastors. At the meeting, community members spoke for more than two hours in support of the program. The only voices in opposition to the SSP were the county commissioners.

In response to the decision Kelly Hans, an HIV Prevention Outreach coordinator at the Scott County Health Department who runs the SSP on a day-to-day basis was disappointed.

Over the past few weeks, community leaders including Hans have mobilized to ask that the commissioners continue this critical life-affirming public health program. They held a well-attended press conference and town hall on May 18 to share facts about the program’s success and how it keeps people healthy and saves lives in the community. They also testified at a commissioner’s meeting, held a vigil, and coordinated hundreds of phone calls, emails, and postcards from Scott county residents to their commissioners.

Dr. William Cooke, a local physician who treated patients during the 2015 HIV outbreak, is concerned that ending the SSP will lead to another deadly outbreak: “The syringe service program works. It’s unnecessary to close it. It’s an indispensable tool. Nothing replaces that tool, nothing else that we have that will replace that.”

Without an SSP in Scott County, a recent Brown University study projected a dramatic surge in new HIV cases. According to officials, the resulting public health crisis would be catastrophic for the community, especially in the midst of a pandemic. This is exactly what happened in West Virginia in the last few months as rates of HIV infection increased dramatically following the 2018 closure of similar SSP programs.

Although disappointed, Hans, Cooke, and other members of Get Healthy Scott County will continue to fight to revive the SSP and for other evidence-based solutions to stop the spread of disease and save lives in their community.

“It’s disheartening, but we have six months, so I’m grateful for that. There’s still a lot of work to do around education and stigma around our syringe exchange,” explained Hans.

Get Healthy Scott County is a coalition of members made up of healthcare, schools, businesses, physicians, substance abuse coalitions, fitness organizations, human service groups, law enforcement, and others concerned about health. They want Scott County to be a community where abundant life and dignity where recovery is always possible.

Hoosier Action is a nonpartisan, homegrown community organization made up of thousands of Hoosiers, mostly from rural and small-town Indiana. We believe that all Hoosiers, regardless of how much money they make, should have a say in the decisions which affect our lives.