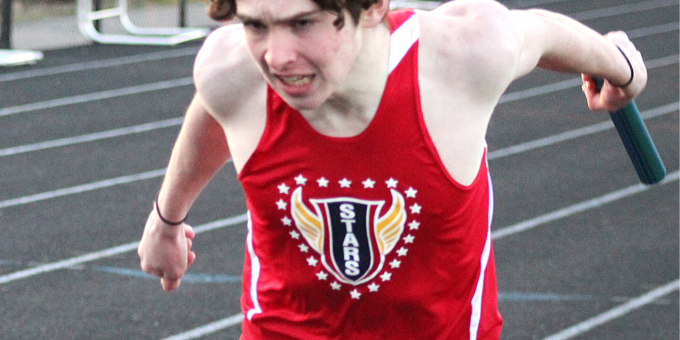 BEDFORD – Zane Thompson is Bedford North Lawrence’s version of the unbridled young colt, turned loose in a wide-open pasture to gallop, testing those fresh legs and discovering just how fast he can race.

With no experience, with virtually no training for over a year, Thompson has burst on the scene. He’s taking it on the run, all the way to the IHSAA state finals, a testament to his sheer, raw ability and a promise of a spectacular future. Every hurdle he encounters, all eight of them to exact, he has cleared with ease.

Thompson will compete in the state meet on Friday at Ben Davis, and if someone had predicted that prior to his first race this season – the opening meet at Bloomington North in early April – BNL coach Brett Deckard would have huffed in disbelief. Fast forward, and everything Thompson does is fast and going forward, the streaking sophomore is seeded 23rd in the grueling 300 hurdles.

That seeding might not be impressive, but it is when considering Thompson had not raced since junior high. He missed his freshman season when the virus wiped out all spring sports. He had never attempted the 300 hurdles. But he finished second in his first race, and eight meets later he’s a sectional champion and a regional runner-up.

“We had no idea,” Deckard said. “When he started running, he was always up front. So I asked him ‘Have you ever hurdled? Let’s try that.’ He’s going to be pretty good, when he figures out just how good he can be. He can run just about anything.”

Thompson finished that debut race in 43.53 seconds. Eight meets later, after winning the sectional at Jennings County, he clocked 40.77 in the regional at North, just shy of the school record (40.66) shared by Andrew Lafferty and Elijah Grider. He has found his niche.

“In eighth grade, I started with the 100 hurdles and was pretty good, but I had ran cross country,” he said. “I had a lot in the tank, so I started running the 300. And I really enjoyed it.”

Enjoyed it? The race is torturous, a dead sprint for 3/4 of the track with eight hurdles spaced 35 meters apart. Each hurdle drains speed and energy, especially when there’s been no formal training on how to clear the hurdle with minimum effort and maximum efficiency.

“My form isn’t the best,” Thompson said. “During the regional, I would jump over the hurdle and immediately have to make up ground, because those kids in front of me, their form was so good. My speed has to be good to keep up.

“The longer you’re jumping over those hurdles, the less energy you have. It multiples, every hurdle you go over it just gets incredibly harder. And that’s pretty fun.

Thompson could vault up the seed charts with a fast race, with a herd of 14 runners within a eye-blink of each other after making the finals with a time in the 40-range. Anything under 40 could boast him into contention for a podium spot (for the top nine finishers). That would be an incredible achievement.

“It’s such a hard race,” Deckard said. “When he gets his form, he will cut down even more. They’re so close at this level. Everything is so tight. If he runs a good race, he could be in the mix.”

That’s not the primary goal. Thompson is chasing the school record. Anything else would be a long-shot bet hitting the board.

”The record would be awesome,” Thompson said. “I just want to enjoy it. I love it, the adrenaline, the way I feel when I’m racing. Not having last season set me back, I would be more developed as a runner and I would know what’s going on, if I had that season. But we’re still doing well.”

Thompson is scheduled to compete at 7:20 p.m.