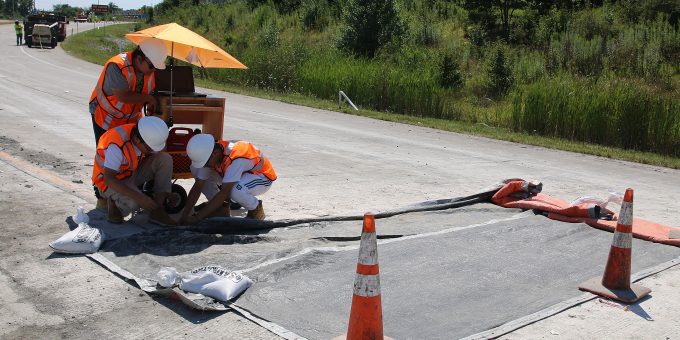 Once new concrete is poured – whether in new road construction or in a patch on an old road – it takes a while for concrete to be ready to bear the heavy loads and stress of being driven on.

In 2019, a team led by Luna Lu, Purdue’s American Concrete Pavement Association Professor of Civil Engineering, developed sensors that can be embedded in concrete on the road to monitor strength through changes in hydration, stiffness, compressive strength, and other qualities. The sensors run on electric energy that is generated when mechanical stress is applied to the patch – when something heavy runs over it.

The Indiana Department of Transportation has been using these sensors in spots along interstates 465 and 74 for nearly two years. The Purdue team is also working with the Federal Highway Administration to pilot the sensors in Texas, Colorado, Tennessee and Missouri, though Indiana was the first to implement them. The sensors allow engineers and INDOT to be confident in whether a concrete patch or road is ready for cars, trucks and other heavy vehicles to trundle across it. They can also track the concrete over its lifetime and predict when it needs to be replaced before it begins to fail.

“Our sensors could help make data-driven decisions to determine the construction schedule and improve the quality of concrete construction,” Lu said. “Being able to track concrete strength over a longer period of time would help engineers understand if they’ve over- or under-designed roads and better determine when to replace the concrete.”

The same sensors can also be used in the concrete of buildings, bridges, dams and other structures. This year, the American Society of Civil Engineers named the sensors “Infrastructure GameChangers.” A video of the sensors being installed is available on YouTube.

Lu and her team are also working to make concrete longer lasting by giving it the ability to heal itself. They are investigating a range of highly absorbent sand-like materials to mix into the concrete. When the concrete cracks, these substances absorb water and cause chemical reactions that produce solid substances to seal off a crack, almost like human skin healing from a wound.

“Most road repairs are for potholes, sealing the crack,” Lu said. “The developed self-healing concrete not only seals the crack, but you can also regain the strength of the property that can extend the service life of the pavement and roads.”

Cement, a major component of concrete, the world’s most popular building material, is responsible for more than 8% of the world’s carbon footprint.

Mirian Velay-Lizancos, assistant professor in the Lyles School of Civil Engineering, is working to significantly reduce that footprint by increasing concrete’s carbon uptake while increasing the durability of concrete.

With the right proportions, adding nano-titanium dioxide to the cement paste that makes up concrete, Velay-Lizancos has discovered, can double its ability to sequester carbon dioxide over the same period of time. More famous for its role in sunscreen and makeup, the addition of titanium dioxide nearly doubles concrete’s absorption of the problematic greenhouse gas. Traditional concrete naturally absorbs carbon dioxide, but it takes decades or even centuries. Velay-Lizancos uses nano-titanium dioxide to change the microstructure of cement paste, making the porous matrix of concrete more reactive to carbon dioxide, increasing carbon capture. The addition also increases road durability.