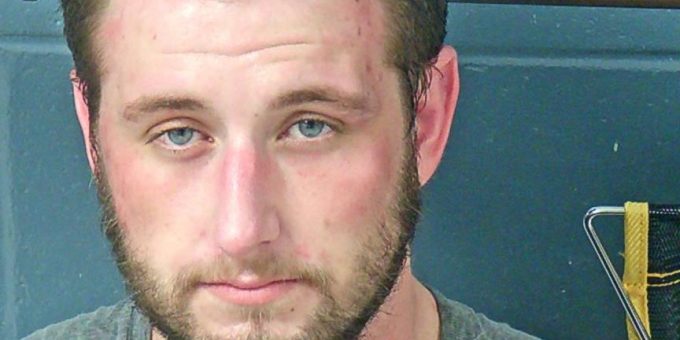 When officers arrived they found Perry in a dark shirt flee from a parked car in the driveway into an attached garage.

Other officers found 78-year-old Derenda Todd, lying on the kitchen floor. Her left leg was bent underneath her right leg in what police say was an awkward position. The woman was completely incapacitated and could only mutter short phrases. She told police she was pushed by her grandson, then 26-year-old Mark Perry. Todd was transported to IU Health Hospital by ambulance for treatment. She died at the hospital on Sunday, March 14, 2021.

A second woman in the home stated Perry had pushed her into Todd, causing her to fall.

Officers were able to locate and detain Perry.

He forcibly pulled away, slipped out of his jacket and attempted to flee from officers. Officers were forced to take Perry to the ground in an attempt to regain control.

While on the ground Perry repeatedly tried to stand up and push away from officers. He then pulled his hands away and tucked them underneath his body. Officers made several  attempts to pull Perry’s hands out from under him and gave multiple verbal commands comply. An officer then applied his taser to Perry’s lower back in hopes to stun him. This was unsuccessful and Perry continued to resist officers.  Officers then delivered strikes to the large muscle groups of Perry’s legs and back to attempt to get him to comply. When those attempts were unsuccessful, another officer attempted to use his taser to stun Perry in his right leg.

After being placed inside the vehicle Perry was transported to the Lawrence County Jail. At that time he was facing charges of two counts of resisting law enforcement, battery against a public safety officer, and domestic battery resulting in serious bodily injury. Those charges were admended after Todd’s death.

Perry has pleaded not guilty in Lawrence County Superior Court II before Judge Bob Cline to the crimes on May 14th. He is currently being housed in the Lawrence County Jail. Perry is being represented by Bloomington Attorney Sam Shapiro. Perry is scheduled for a pretrial hearing on July 8, 2021.