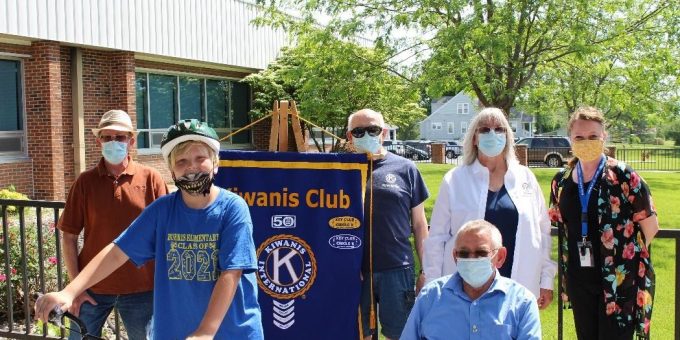 These programs were created by Kiwanis International to recognize students who improve their grades (BUG) or exhibit good behavior (TK) during the school grading period. These awards programs have been celebrated at Burris Elementary for more than 10 years and awarded in front of the students’ peers during the school lunch period.

Once the school administration provides a list of eligible students, the club prepares the awards. Club members announce the recipients and present the award materials at the school.

Each school year, between 600 to 800 awards are given out in these two programs. An eligible student in each of these programs will receive an award at the end of grading periods 2, 3, and 4. One exciting aspect of the program is the student can achieve an award every grading period they meet the program’s requirements.

These programs are separate, so a child is able to be rewarded for grades and behavior within the same grading period.

Eligibility criteria for the BUG program includes a full letter grade improvement from one grading period to the next and the student must not drop a class within that grading period.

The Terrific Kids (TK) Program rewards students for good behavior, based on standards set by the teachers and school administration.

Award recipients receive a beautiful certificate and a goody bag filled with candy, a snack, a small toy, and other rewards. They will also be given a ticket for a special drawing that will be held at the end of the school year.

Bicycles are the prizes that have been presented to the drawing winners in past years, typically four bicycles are given, a boys bicycle and a girls bicycle for each program.

However, as with many things, the COVID crisis changed the BUG/Terrific Kids programs this year. The club members were not able to physically present the awards at the end of the grading periods in 2021 and decided to have a year-end celebration for all students.

All students had a chance at winning a bicycle on May 20th and all 340 students received a goody bag on May 21st.

The Mitchell-Grissom Kiwanis club thanks Principal Gilbert and all the teachers and staff that made the day possible.

The club would like to thank and show appreciation to one specific Kiwanis club member, Susan Weir, who donated the funds to purchase 12 bicycles from the Bedford Walmart. A special thanks goes to IU Health for the donation of 12 helmets. IU Health also attended the bike giveaway to fit the helmets and take photos.