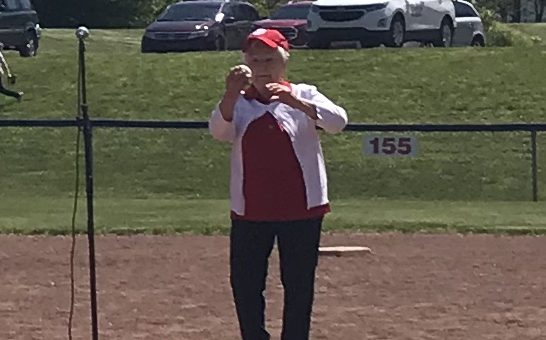 BEDFORD – After a year-long hiatus of not being able to play baseball or softball, the favorite pastime of many – play was in full swing Saturday at Wiley Youth Park

Barbra Sargent threw the first pitch to start off a season, of bats cracking, children running bases, and crowds roaring to support their favorite team.

“This is awesome being able to play this year, disappointed that things were the way they were last year. But, it is great to see everyone back this year,” said Ben Barker, Athletic Director Boys & Girls Club Lawrence County.

A total of 20 teams will be frequenting the park this year with boys and girls ready to “Play Ball” and burn off some energy from a long school year.

Saturday two fields were dedicated, the first was the T-Ball field which was named Elliott Field, and the big field was named Hensley Field.

Fifteen-year-old Devon Hensley was a familiar face at the Boys & Girls Club of Lawrence County. He had been an athlete for most of his life.

Hensley had a physical in November 2007 before the start of the baseball season at Bedford North Lawrence High School. Hensley, who was a freshman, and everything was normal and the doctor cleared him to play. On April 2008, Devon went to practice after school and spent another hour playing catch with his brother. That night, around 2:00 a.m. his mother Ericka, who was sleeping nearby, awoke to find him shaking violently.

Chuck and Ericka along with paramedics performed CPR, but Devon never woke up. He died that night, an autopsy later revealed his heart was near twice the size of a normal 15-year-old’s heart.

According to health officials, one out of every 20,000 high school-aged athletes dies every year, usually during high-intensity sports, such as football or basketball. As in Devon’s case, the most frequent cause of death is hypertrophic cardiomyopathy or HCM.

The condition is the most common genetic heart defect, about 500,000 Americans have it. Symptoms can include fainting, chest pain, and difficulty keeping up with other kids during physical activity. But most people are unaware that they have the disease. For some young athletes, the evidence of the condition comes too late as in Devon’s case.

HCM causes the heart muscle to thicken, which makes it harder for the organ to pump blood. Changes in the arrangement of the heart muscle cells can cause rthymn problems that lead to sudden death usually without prior symptoms.

Saturday both of his parents Chuck and Ericka, and his brothers attended the dedication. It was a bittersweet memory for the parents but are honored that so many to keep Devon’s memory alive, who not only played baseball but also played basketball and football.

The T-Ball Field was named the Elliott Field in honor of Dave and Judy Elliott founders of the Elliott Stone Company near Bedford in 1957.

When Dave passed away in 2009, official control of the company was turned over to the couple’s four children, but Judy remained a visible and active presence. Judy passed away on February 5, 2019, the day after her 87th birthday.

David was drafted in the U.S. Army during the Korean War and served in Germany.

In 1987, a Stone Expo in Atlanta Georgia, David was awarded the first annual Stone World Award, Technological Achievment Award as being the most innovative quarrier in North America. In 1988, Governor Robert Orr presented him the Sagamore on the Wabash honor.

The two had a strong belief in giving back to the community.

David served on the Bedford Park Board under three mayors: Clarence J. Hauck Jr., Lovell L. Harp, and John Williams, serving as president several years. He helped to establish the Bedford Recreation Foundation during this time. He served on the Board of Directors of the Bedford Chamber of Commerce.

Judy was on the Business Panel of the Becky Skillman Leadership Institute. She had served as a board member of the Dunn Memorial Hospital, North Lawrence School Board, and Bedford Federal Savings Bank, and a member of Psi Iota Xi.

The two worked together making the company into an industry leader. Her love for the limestone industry was evident to anyone fortunate enough to be on one of her famous quarry tours.

Saturday their son Brian and Robin Elliott, and his daughter Cindy attended the dedication to honor the couple who was remembered for their community service.