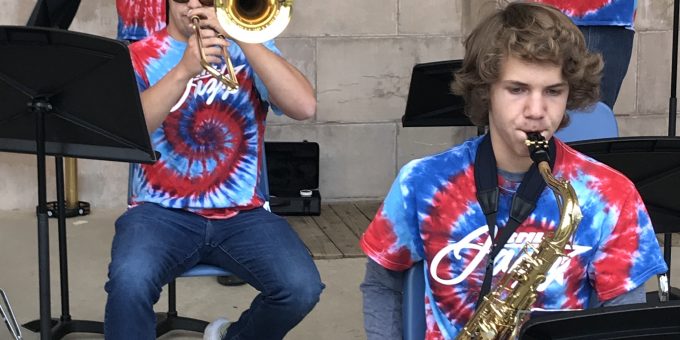 BEDFORD – The Bedford North Lawrence High School Jazz Band and Orchestra put on a concert Friday evening at the Otis Park Bandshell. Music filled the air from the two groups who only practiced together in person a few times as the group mostly met virtually throughout this year.

Despite some setbacks. the group encountered their talent for their love of music which permeated through the air. It was a well-attended event. The audience brought lawn chairs for the approximately an hour-long concert.

The Orchestra, under the direction of Heather Jones, played three selections which included the Lemon Twist, Rolling in the Deep, Main and the them from the movie Avengers.

The seniors from the group are Laney Gilbert on violin and Jacqueline Blake on cello. The two will be missed as they go on to further their education.

Under the direction of Jim Jones, the Jazz Band performed Friday night with eight selections that included music from the movie Tarzan, You’ll Be In My Heart, and Heart N Soul but with a jazz twist which was an audience favorite.

Some of the students plan to use music as a career choice to further their education while attending the college or university of their choice.

“I started playing in middle school, my older sister played in band and kind of had the push from my mother,” said Aubrey Eads who explained how she got started in music. Aubrey plays trumpet and piano and says she likes it.

“I want to be a music therapist, music releases stress, and showing it to other people and different genres and the history behind it and teaching people about it is very neat,” said Eads who is a 10th grader at Bedford North Lawrence High School.

Those in attendance applauded the talented group of students which each section from the saxophones, trumpets, trombones, keyboard, bass guitars when brought together created the beautiful sound that wafted through the hills at Otis.

Josh Hennion, plays alto saxophone and learned a piece in just two days after one of the other saxophone players was unable to be there Friday evening. During Berry Good Heart you could hear his talent as a musician shined through the piece awing the crowd.

Hennion, was also awarded the Louie Armstrong award from the group which is awarded to a Senior every year.

In these very difficult times, the music took the audience to a different place where their own troubles and worries faded for a little while. The music brought the audience to new heights bringing peace and comfort for a space of time.