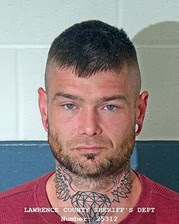 SPRINGVILLE – The Indiana State Police received information from the Lawrence County Prosecutor’s Office that 32-year-old Robert D. Collins, of Springville, was wanted on seven felony offenses in Lawrence County, plus an additional warrant through Monroe County.

Troopers began an investigation into the whereabouts of Collins, who was reportedly hiding away from his residence to avoid apprehension.

On Monday, ISP troopers utilized a variety of investigative techniques, eventually determining that Collins was at a residence in the 3000 block of Knightsridge Road in Monroe County.

At that residence, troopers made contact with a female who admitted that Collins was inside the residence.

Troopers obtained consent to enter the home where they located Collins and he was taken into custody without incident.