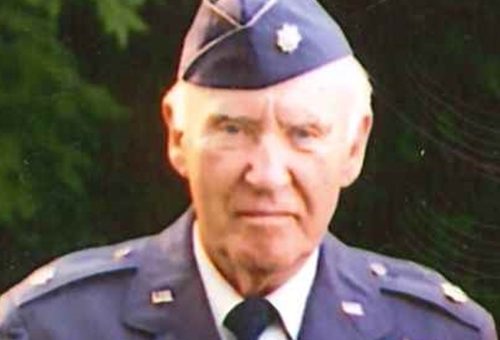 Col. Feather joined the Air Force (then known as the Army Air Force) in August 1943. He received flight training at NC State and attended Navigation School in Louisiana where he received his navigation wings and a commission as a Second Lieutenant. A member of “The Greatest Generation,” he served as a navigator with the 67th Troop Carrier Squadron during WWII flying C-46 transport aircraft from the Philippines through the northern islands of Japan.

As a USAF Reserve officer, he flew with the 71st Special Operations Squadron (SOS) on the AC-119 “Shadow” gunship in combat in Vietnam, eventually achieving the rank of Lieutenant Colonel.

He was the recipient of several combat medals, including the Air Medal for meritorious achievement while participating in aerial flight, the Meritorious Service Medal for his work in establishing the first aircraft munitions safety program for the 434th Tactical Fighter Wing, and the Distinguished Flying Cross for heroism or extraordinary achievement while participating in aerial flight.

As a civilian, he worked as a supervisor and manager of the guided-missile maintenance branch at Crane Naval Weapons Supply Center from 1959 until his retirement in 1979.

Byron enjoyed his retirement years golfing, fishing, mushroom-hunting, traveling, keeping up with his five grandchildren and their activities, and trying to “beat the odds” at the casino.

Known as “Iron Byron” for walking the hills of Otis Park Golf Course well into his 80s, he was particularly proud of his two holes-in-one at Otis.

He was a great dad, Little Pap, Papaw, and great-grandpa who was happy to play a game of backyard football or baseball with his grandchildren. He loved them all dearly,

No public visitation is planned. A private family graveside service will be held at a later date. Day and Carter is in charge of arrangements.