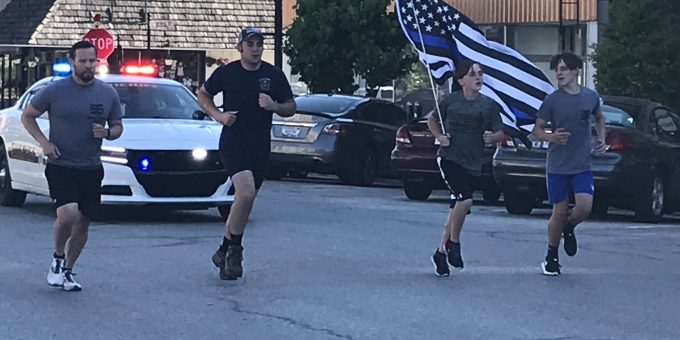 SPENCER – The founder of Running 4 Heroes Zechariah Cartledge came to Spencer Saturday evening to run a mile to honor Deputy James A. Driver who died in an auto accident responding to an emergency.

Zechariah Cartledge, traveled from Florida, to honor the memory of Deputy Driver.

“I deliver checks in the amount of $10,000 to injured first responders. I have run a total of 894 miles over the past two years and raised over $126,000 to recipients across the nation,” said Cartledge.

“At about eight years of age, I became inspired about first responders and did community runs for them. I had a lot of friends whose mom and dads were doctors, firefighters, or police officers. That touched me to start doing something that I love – to help the people that I love,” Cartledge added.

To support his cause you can go to his Facebook page.

You can also apply for a first responder grant award of $10,000. A grant is awarded every month.

The event itself was organized by Sarah Hicks who’s husband was a retired military police officer.

“We are thankful to the first responders and their service,” said Hicks who was pleased with the turnout for the event.

Deputy Driver’s family joined local first responders from police, fire, and community members in the 5K Run Saturday that started at the Owen County Fairgrounds and ended at the Spencer-Owen Elementary School.

Once arriving at the Spencer-Owen Elementary School a 21 second moment of silence was taken to honor officer Driver.

A prayer was said for the Driver family as well as for the protection of first responders in attendance and the many more who risk their lives on a daily basis.

The family presented a flag to his daughter Beau Woodruff while Drivers’ mother from England watched via Facebook Live.

A $1,500 Scholarship in the name of James D. Driver will be awarded to an Owen-Valley High School student who is a child of a first responder or military personnel and pursues a career in those fields.

Driver’s daughter LilyAnne Marie Driver was presented a $1,500 scholarship Saturday evening in the name of her father.

The death of Driver was still fresh in the minds of those in attendance but Driver was honored among family and friends. Driver called Spencer his home – may his legacy of public service live on in Owen County.