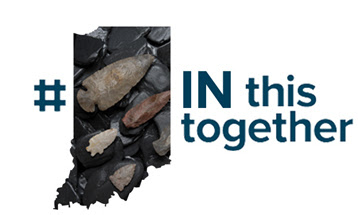 UNDATED – Archaeology Team members have been in the field lately related to some interesting projects.

On April 12, State Archaeologist Amy Johnson conducted her first site visit to the Muscatatuck Urban Training Center in Jennings County to learn about the progress of Phase III archaeological investigations which are being conducted by Cardno at site 12Jn447, a multicomponent precontact site.

This work is being conducted under an archaeology plan approved by the DHPA. Johnson met with Cardno archaeologists, staff of the Indiana Army National Guard, and an archaeologist who works with the Miami Tribe of Oklahoma and was shown several of the archaeological features which have been discovered thus far.

Check out this promo video of the next video in the “Forgotten Muscatatuck” series about the archaeological excavations that took place over six weeks.

In Phase II, Archaeologists A.J. Ariens of the Division of Forestry and Rachel Sharkey of DHPA have been conducting a Phase II investigation at Ravinia State Forest near Martinsville, which was once the location of the Gossard Breeding Estate.

The estate was owned by H. W. Gossard, a Chicago businessman and founder of the H.W. Gossard Company, a prominent corset manufacturing company in the early twentieth century. He later became interested in breeding and raising award-winning Berkshire hogs, Ayrshire dairy cows, and Percheron horses. Over the course of the breeding estate’s years in operation, numerous farm buildings, primarily barns, were built. In addition to the farm buildings, the mansion and the houses of many of the farm’s staff were located in the area.

Many of the buildings were torn down once the estate was no longer in operation and the mansion burned in 1979. Today, much of what remains in the area are the foundations of the barns, while the remains of the house may have been bulldozed at some point.

The purpose of the investigation is to determine the extent and content of archaeological deposits, evaluate any disturbances to the site that happened after its occupation period, and determine its potential eligibility for inclusion on both the National Register of Historic Places and the Indiana Register of Historic Sites and Structures.

So far, archaeologists have found brick fragments, glass and melted glass, a hexagon-shaped tile, and other small clues from the habitation of the site by the Gossard family.