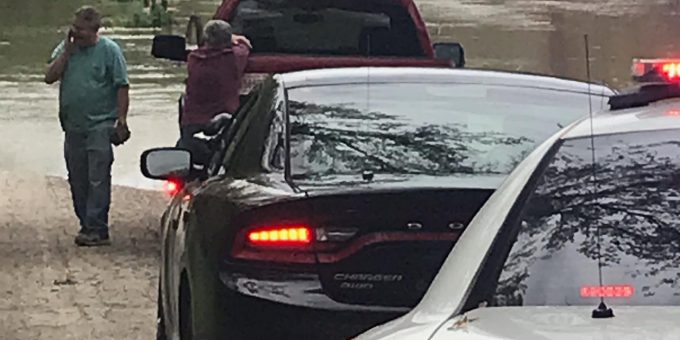 According to Shawswick Firefighter Bob Barber, 65-year-old Jerome Wright was driving his pickup truck pulling a trailer to deliver a vintage vehicle to a resident on Red Crane Road when he drove into the floodwater.

White did not know the area and was using GPS to get to his designation.

“He didn’t realize the road was flooded,” added Barber.

“I made a mistake and now my name is mud,” said Wright

The water kept getting deeper the farther Wright traveled.

“It just got too deep and I got stuck,” he added.

White was able to climb out of his truck and onto the top of his vehicle.

Using a boat, Conservation officers were able to rescue White from the floodwaters.

Wright was not injured, “Just wet from the waist down”, added Barber.

The vehicles were left in the waters until the water recedes and a tow truck can pull them out safely.

There were no flood road signs posted in the area at that time.