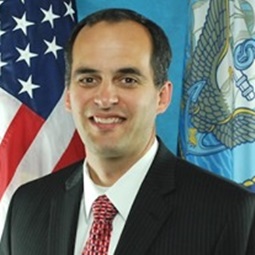 Seyer was recognized for significant efforts during his 18-year career at NSWC Crane Division.  He developed short and long-term strategies that resulted in national leadership recognition in the Electronic Warfare (EW) mission area.

Seyer’s award commendation letter reads, “…your dedication and supervision to the Expeditionary EW mission resonates in every aspect of your leadership and drive…”

CSCM recognizes performance well above what is expected of an individual, and above the degree of excellence reflected in a performance evaluation. Performance is at the equivalent level of the Navy and Marine Corps Commendation Medal.

Seyer began his career at Crane in 2003 as the Quality/Safety Focal Point where he provided quality systems and safety support to the Electro-Optics/Chemical and Bio Sensors Division. He was selected as the Chief Strategist for the Spectrum Warfare Department in 2013. In that position, he was responsible for the department’s strategic planning efforts where he successfully worked to develop short and long term strategies resulting in achievement of national leadership in the EW mission area. In 2018, Mr. Seyer was selected as the Division Manager for the Expeditionary EW Systems Division where he is responsible for management and oversight of a division team supporting several expeditionary EW Systems and direct workload execution of multiple Acquisition Category (ACAT) II programs impacting U.S. Navy, U.S. Marines, and U.S. Special Forces positioned around the globe.

As the Chief Strategist, Mr. Seyer positioned NSWC Crane to be a leader in EW Systems among the Department of Defense, working directly with the Spectrum Warfare Systems Department Director to make strategic plans that have enabled successful execution of our Command’s strategic intent. As the Division Manager, Mr. Seyer’s dedication and supervision to the Expeditionary EW mission resonates in every aspect of his leadership and drive, establishing an effective and innovative approach that retains and develops talent to further NSWC Crane’s and the DoD’s EW mission.

NAVSEA employs a diverse, highly trained, educated, and skilled workforce – from students and entry-level employees to experienced professionals and individuals with disabilities. We support today’s sophisticated Navy and Marine Corps ships, aircraft, weapon systems, and computer systems. We are continuously looking for engineers, scientists, IT and cyber specialists, as well as trade and other support professionals to ensure the U.S. Navy can protect and defend America. Please contact NSWC Crane Human Resources at crane_recruiting@navy.mil.